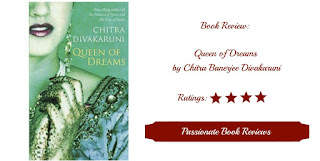 So far I have read two books by Ms. Divakaruni and loved reading them both – Arranged Marriage and The Mistress of Spices.

So without much thinking I picked ‘Queen of Dreams’. The title is so enticing; I probably wouldn’t have left it behind even if this was my first book by the author.

Let’s move on to the review….

Rakhi, an Indo-American female, strongly feels the need to know more about her parents’ country of origin.

But, unlike her best friend Belle (Balwant Kaur) parents, her parents never shared any information regarding India or forced Rakhi to live life in America as per Indian traditions.

(I think, children are strange creatures, when their parents want to share their heritage with them, they don’t want to know (like Belle in the story). But if parents don’t force them (in case of Rakhi) to know their “supposed heritage”, then they start harboring resentment.)

Rakhi longs to know more about her Indian heritage from her mother. But more than that she wants to explore and be an active part of her mother’s intriguing and mysterious world of dreams.

Her mother’s a dream interpreter and helps people deal with their problems by interpreting hidden meanings in their dreams. Rakhi too wants to do just that and be just like her mother.

Her mother probably would have taught her the craft of interpreting the dreams, but much to the disappointment of mother daughter, Rakhi is not a dream interpreter.

So over the years, Rakhi compromises with that fact and builds her own world to get lost in. She meets Sonny, falls in love and gets married.

An incident in a club, changes Rakhi and Sonny’s relationship drastically and after the birth of their daughter, they divorce. Rakhi is an upcoming artist and a struggling entrepreneur, who runs a small teahouse in partnership with Belle.

In the midst of all the drama and chaos in her personal life, Rakhi is struggling to establish her business and painting career.

However, her professional troubles escalate when a new coffee-house opens in the neighborhood, giving stiff competition to their small business.

Rakhi and Belle have no idea how to deal with such a formidable opponent. That’s when Rakhi’s mother steps in and gives them some useful suggestions to help their business face the competition.

Unfortunately, Rakhi’s mother dies in a car accident, leaving Rakhi to pick the pieces of her life along with her father, who she barely talks to.

But Rakhi needs her father’s help as he’s the only one who can translate her mother’s journals, and she’s desperate to learn more about her mother’s life.

Through her mother’s journals the story unravels, helping the father daughter duo connect with each other like they never had before.

Another tragedy happens, threatening to take away all that they’d build and are trying to build. This time around, there’s a hint of a happy ending, but you can make your interpretation after reading the book.

Another amazing story written by Ms. Chitra Banerjee Divakaruni! Once again the author has beautifully woven a story that’s modern with a sprinkling of the paranormal.

Now that I’m addicted to her brand of storytelling, I won’t be able to rest until have read all the books by the author. The cover art of “Queen of Dreams” looks fabulous.

“The best way to love people is not to need them. That’s the purest love." ~~ Chitra Banerjee Divakaruni (Book: Queen of Dreams)”

I have read this quote so many times and still have no idea how to explain it. Sometimes I feel I understand what the author is saying and other times I feel completely lost in translation.

Rakhi’s mother’s life story. Frankly, I like the story, but would have loved it if it was exclusively about the ‘Queen of Dreams.’

Once again the author has constructed such an intriguing paranormal world co-existing with reality that it’s difficult not to want more of it.

The non-existence information about ‘the man in white” Rakhi notices sometimes around her disturbed me. I don’t like unsolved mysteries, not in the fiction world at least.

Captivating read! ‘Queen of Dreams’ is one of those books you can read many times without getting bored.