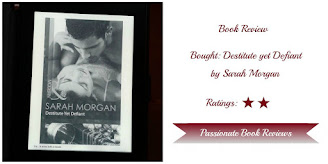 I downloaded this book when I was on 'ebook download binge' after installing a reading app.

Another reason was: I recognized the author’s name and remembered enjoying reading a couple of her books. Just couldn't remember the name of the books on time.

Let’s find out a little about ‘Bought: Destitute yet Defiant’…

Jessie is a singer in a night club in the shady part of the city. She’d not chosen the job, but she does not have a choice. She has to make a living and also pay the debt her late brother left behind.

She's trying her best to pay the thugs and keep out of their clutches. But she knows they want their money back sooner than she’d pay and are ready to kill her.

One night after work Jessie tries to outrun the thugs, but they cornered her. She's ready to die trying to defend herself when....

Silvio, her brother's best friend and her childhood crush, appears out of nowhere to save her. He whisks her to the safety of his new world.

Unlike Jessie and her brother, Silvio with his determination and hard work left the slum life behind and built a new luxurious life for himself.

Three years after the death of his friend and Jessie's insistence that he leaves her alone, Silvio comes back to save Jessie.

Seeing the way Jessie's barely managing to live or pay her brother's debt, Silvio feels guilty of leaving her when she needed him the most.

He decides to save her from the life in the slum, whether she wants to take his help or not. This much he can do for his late friend's little sister and his secret crush.

Jessie's thankful, yet is angry with herself for allowing Silvio to save her. He's the one she blames for the death of her brother...if only he'd not given her brother the money.

Silvio blames himself as well, but he doesn't allow his past to dictate his future. He has come to understand that his friend’s death wasn't entirely his fault as Jessie likes to believe.

Jessie wants to leave Silvio's world as soon as possible. But Silvio convinces her to stay and allow him to help her build her life from the scratch.

The more time Jessie spends with Silvio, the more it becomes difficult to keep pretending that they are not attracted to each other.

And that maybe she's wrong to accuse Silvio for her brother's lack of wanting to take responsibility for his actions.

Yet Jessie doesn't want to stay in Silvio's life as she's sure she's just another project for him.

Silvio's predicament: how to inspire confidence in Jessie? And if she loves him as he does.

"Some people are too messed up. Or perhaps they just don't want to be saved. But at the end of the day there's only so much someone else can do. They can give you a ladder but it's up to you to climb up it." ~~ Sarah Morgan (Book: Bought: Destitute yet Defiant)

1: The plot moves too fast, which is good, if you enjoy short novels aka novellas. But it also gives the feeling as if it's jumping from one scene to another, leaving you wondering what’s happening.

2: I understood the insecurities of Jessie's character and even sympathized.

As her life changes within a fortnight, so her insecurities & phobias are understandable. But after a while, her psychoanalysis of everything around her gets annoying.

3: The thugs after her life are relegated to the background which is fine as well. But it means there's not much happening action wise in the story.

4: Jessie comes off as not just clueless about life, but totally stupid sometimes, which seems impossible. She lived a rough life since the age of five and she behaves as if she lived a sheltered life. Her insecurities are understandable, but her naiveté is unbelievable.

Maybe it has something to do with some guideline that all Harlequin novels follow:

According to which heroine, at all times is supposed to be stupid or turn into one after meeting the hero. Because stupidity and naiveté combined is some sort of aphrodisiac!

5. The story falls along with the ones that needs more space to develop.

The plot, despite the glitches, moves at an exciting pace. You might not find anything amiss, if you are only looking for a weekend read that provides you some entertainment, which this book does.