Book Review: Music of the Night by Nancy Herkness 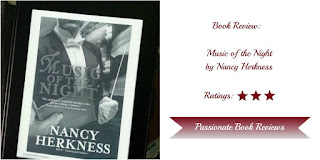 “The compulsion to create cannot be stopped, no matter what obstacles you put in its way.” ~~ Nancy Herkness (Book: Music of the Night)

When you cannot decide which book to download to fill your Kindle Unlimited quota, going with yet another book of an author whose books you liked before, makes perfect sense.

I was a bit apprehensive about this one, but then I remembered reading ‘Shower of Stars’ and downloaded it without further internal debate. Even if I’d not like it, it’s okay. You cannot like someone’s all stories.

‘Music of the Night by Nancy Herkness’ ~~ Synopsis:

Detective Lieutenant Anna meets the world renowned conductor Nicholas when she begins the investigation of the murder of his close friend French horn player.

The tall, dark conductor is on top of Anna and her partner’s suspect list as Nicholas at best seems elusive. His presence at the murder scene makes him a suspect at least. Their theory is maybe due to some personal or professional reasons, he did it.

Nicholas is not just a suspect but also someone who could help the detectives navigate the world of music without much trouble. He also offers to give them easy access to people known to the victim.

He only has one condition -- he wants to be part of the investigation and want to know how the case is proceeding.

Anna and her partner are wary of Nicholas and his offered help, but they need it nonetheless, whether the smooth talking conductor is a murderer or not is something yet to be decided.

There’s another witness, but how much help that one could provide is questionable, considering she seems hysterical at times.

Nicholas is not worried about being the number one suspect. The more pressing matter for him is to find out the reason why his friend was killed.

Its true his late best friend was known to make an enemy or two at times, but Nicholas is sure none would be stupid enough to ruin their careers in such a fashion.

Could it be for the piece of paper he found in his friend’s hand? When should he hand over the paper to the detectives?

It becomes clear to Anna that they do indeed need Nicholas help. Also, some past personal information does give Nicholas, at least, some motive to kill his friend.

So Anna goes to question him and gets caught up in the web of his seduction. It seems all the mayhem and chaos is because of a piece of paper that’s supposed to be part of Beethoven’s Tenth Symphony.

Soon freaky accidents begin to happen and Anna begins to wonder if Nicholas is the suspect or the next target.

I liked Anna & Nickolas. They are very different characters and for a while I was not sure about them. Then I realized that I was reading an already written story, no need to stress how it’d all come together in the end.

Anna & Nicholas are so different, yet the author manages to make you believe that it’d work between them.

Everything comes out fine in the end and there is a sort of HEA, it’s just not convincing as I couldn’t stop thinking if they would work out in real life.

Anyways, let’s move on to the murder mystery angle.

I liked the murder mystery that’s going on. It’s exciting trying to find the killer. But the worst part was I couldn’t catch the killer this time -- maybe next time.

Despite it being interesting and all, I found my interest waning at times. The author’s writing style is engaging as ever – that’s what made me continue reading till the end, whether I believed in something or not.

You may like it, if you’re looking for a Romance Novel with interesting characters and a murder case to solve.