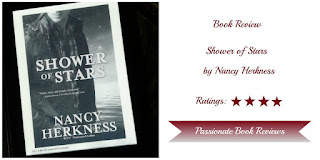 Saying I just liked ‘The Wager of Hearts’ is an understatement. I loved that series! And when I like some author’s couple of books, I go on an over-reading spree. Just to see if I’d add the author to my go-to-author list.

I liked the blurb of the ‘Shower Of Stars’ so downloaded it ASAP before it leaves Kindle Unlimited.

Charlie’s biggest dream was to have her own kids and live a happy life with her husband. But when the dream of having kids goes terribly wrong and her marriage ends because of that, Charlie becomes an adventure travel writer.

She loves her job, but still wants a child. So she decides to adopt. And she’s hopeful that she’d get her child soon enough. Everything seems fine.

Until then, she’s going to interview the elusive and in-demand meteorite hunter Jack. Everyone wants to know about him after he finds a rock that’s probably from Mars.

But she decides to save the life of the dog matters more than the interview. She even manages to involve reluctant Jack in her rescue mission and gets another date for the interview.

Jack becomes intrigued with Charlie’s attitude and more so with her long hair. Giving her another date for the interview doesn’t strike him as dangerous. He knows how to deal with a nosy journalist. If he wants to sell the meteorite at a price that would allow him to retire then he’d play along.

Once he gets out of the business, he’d not have to guard his private life.

Charlie thought things were going smooth until another caseworker is appointed to her case. The new one isn’t too thrilled to know about Charlie’s profession.

So Charlie decides to change direction and as soon as possible start doing something else. Like write a book on meteorites & elusive meteorite hunters, one intriguing hunter in particular. It’s a good idea that’d probably generate publicity. The only thing left to know: Jack’s views on her idea.

Jack wants publicity, but he doesn’t want Charlie to write a book involving him. It surely would bring his past in focus and there’s no way he’d allow anyone to go there if he’d help. So he says no to helping Charlie with the information.

Charlie doesn’t like the idea of writing a book without proper research or consulting the source. But she tells Jack that she’d always write an unofficial book on him & his profession.

Jack wonders how he could nip this disaster in the waiting in the bud. So he asks Charlie why she wants to do it. It doesn’t take him long to find out her motivation.

To solve his & her problem Jack comes with an idea: marriage of convenience. If Charlie marries him for a few months, the caseworker would not have much to hold against her. His only condition: drop the idea of the book.

Charlie wonders if she wants the child so bad that she’d fake marry a stranger. Answer in her case is simple: yes, she’d. It’s the easiest solution.

Jack doesn’t want to get too close to Charlie and Charlie wants to know what his problem is.

To add more complications in their short-term marriage, the caseworker asks Charlie to keep a nine-year old until her relatives are found.

All of a sudden it’s even more important that she & Jack behave like a newlywed. And that would make things complicated as Jack is keeping secrets. His secret if got out in the press might unravel Charlie’s dreams too.

But Charlie wants to help just the way Jack did, but only if he’d allow it.

I finished this one in a day. But that’s nothing new with Ms. Herkness books. I’m enjoying the new spin on the old idea of girl-meets-the-guy, fall, have some drama and get to their HEA.

‘Shower of Stars’ is different, it not only has good main characters, but the secondary characters, are quite good too. Then there’s a plot, a good one!

I read a lot of romance and frankly, I know the gist by now. I don’t complain because that’s what I love to read .

There’s romance, drama, some suspense and of course stars and meteorites in this one to keep you interested.