Book Review: The All-Star Antes Up By Nancy Herkness 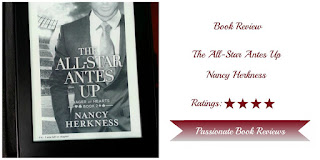 Series: Book 2 in the ‘Wager of Hearts’.

"It's a powerful thing to be able to make another human begin happy with just your signature." ~~ Nancy Herkness (Book: All-Star Antes Up)

If you're following, the series 'Wager of Hearts', then you probably know, who is the next  protagonist in the series. ;)

I finished 'The CEO Buys In' and without wasting time, I downloaded 'The All-Star Antes Up'. If you like one story by an author, it makes sense to download another one, says my logic.

Luke no longer believes in a serious relationship or that he'd even find love. Not after his meteoric success in the football.

But his cynical attitude towards love doesn't stop him from taking part in the wager to find love with his two companions one fine day. He's also wondering what's next for him in the game that favors the young.

He's not getting younger and after his best friend’s retirement Luke begins to wonder: what would he do after his retirement? Unlike his friend, he doesn't even have a family to go back home to.

Miranda left her small town in hopes of having a career in the big city – New York. She finds her calling in being a concierge. She is working as an assistant concierge for now.

But Miranda dreams of becoming a head concierge one day. She’s sure she’d get there. The only trouble is, she needs a reference from her boss, who she's sure hates her.

The reason is simple: her colleagues and the clients she deals with, loves to work with her and her boss is getting envious of her popularity.

So when her boss conspires to make her professional life hell once again, with some help from Luke's troublesome brother, Miranda knows she needs to find a new job at a new place as soon as possible.

Luke doesn't like to get into unnecessary dramas. So if he knew what his brother's up to, he'd have stopped it. Luke lives in the same building where Miranda works. But until the incident, they had never run into each other.

So Miranda's not expecting someone like Luke to be nice or even see the error of his brother's ways.

Luke apologies to Miranda for the inconvenience and invites her to watch the game, something Miranda doesn't want to do. As she's no interest in the game.

But agrees as her brother and nephew is Luke's fan and would love to get the chance to see the game and meet the star player.

Afterwards, Luke begins to woo Miranda. Miranda resists. So what if he's unlike other rich & famous people she's met?  There's no forgetting that he's out of her league and he'd realize that their worlds are different.

Between worrying about his future, handling his envious brother, Luke's determined to woo Miranda in earnest.

After a while, Miranda decides to explore their chemistry too. What’s the harm in it? He'd go back to his life and she'd to her life, so why not indulge this one time.

"When you think about it, I love you is probably the world's most overused phrase. But when your heart is in it, those words take on whole shades of meaning you never imagined before." ~~ Nancy Herkness (Book: All-Star Antes Up)

It happens once in a while that you like back to back books in a series. Or I'm just picking some good ones on Kindle Unlimited.

The best part, you don't have to read 'The CEO Buys In' to enjoy this one and you'd not miss anything either. But you should read ‘The CEO Buys In.'

I liked Miranda & Luke's characters. Their story too is quite engaging just like Chloe & Nathan's.

So I finished it over the weekend. I was expecting it to be an amazing read and I must say the author didn't disappoint at all. I'm looking forward to finish the series with the story of the writer, which is next.