Book Review: The CEO Buys In By Nancy Herkness 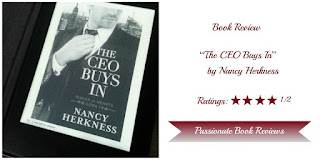 Series: Book One In The 'Wager Of Hearts'.

“When it comes to people, pride is nothing but a high, wide wall you build between yourself and the ones you love.” ~~ Nancy Herkness (Book: The CEO Buys In)

The space for another book became available in my KU library. When I decided not to continue with a time-consuming serial I was reading. It felt as if that author's trying to milk the story until readers have no patience left for that story.

So out goes the nonsense and comes in its place what my instincts insisted would be a good read. I have been fooled into thinking just that on many occasions before, but I never stop judging a book by its cover.

Let’s see if ‘The CEO Buys In’ is as interesting as I ended up thinking….

Nathan has everything one could desire. Except someone who loves him for himself and not for the money he makes. After meeting his latest lady love....

Nathan thought, he’s found the one woman, who doesn’t need him in any manner to advance her career. She’s independent, successful and forging ahead in her career all by herself. But he soon finds out how she'd planned and executed, what to him, seemed like a chanced meeting.

To dump his dating woes in a drink, he visits an exclusive club, only for the self-made billionaires. The owner of the club started it when she’s denied entry into the established ones.

In the club, he meets two other bachelors, a player & a writer, with similar woes and experiences. One of them suggests, they make a bet to find love within a year or lose something valuable, if they failed. All three agrees and goes their way.

In the morning, Nathan wonders if making that bet was a mistake as he's a busy man. But taking care of business comes first instead of worrying about a silly wager.

Chloe just about survives on the salary she gets from working for the startups. But she keeps choosing only startups and work as a temporary employee. The reason is she dislikes big corporations.

But lately, she's wondering about earning good money. So she'd hire someone to stay with her grandmother in her absence. Chloe doesn't want her grandmother to move into an elderly home.

When she gets a chance to work as an executive assistant, for Nathan's company, until his permanent PA recovers from the flu, Chloe agrees. After all, it’s only for a few days and the pay is good. Just Chloe’s luck, Nathan catches the flu and under the fever's haze gets fixated on having her around.

Chloe sympathizes with Nathan's condition. But she’s not a nurse, so it makes no sense to stay with him while he’s hallucinating. When his doctor-cum-friend raises her salary, if she humors Nathan until the fever comes down, Chloe agrees.

She resolves to leave as soon as possible. But before she knows it, she gets entangled in Nathan’s world.

Nathan's first impression of Chloe: she can't take care of his assistant's job, not even for the weekend. He's surprised to find, Chloe’s quite good at her job, maybe better. But none of that explains her presence in his home.

Nathan is a workaholic, so he soon figures out a way to around not being able to attend the office. Since Chloe is around too, his plan to work from home will work just fine. Chloe refuses at first to work at his place. But added bonus makes her say yes to the new arrangement once again.

Nathan finds a chink in her armor & isn't sorry to exploit it. He begins to wonder why Chloe needs so much money, when she doesn't come across someone fixed on it.

Chloe refuses to tell him as she doesn’t want him in her world. At first Nathan insists, Chloe stays around because of the work.

But soon he realizes he likes her company and her as well, even if it seems like she's running after money. He’s determined to find out the reason, whether she wants to tell it or not.

He begins to make time for her and make her life easy. Soon begins the game of seduction and Chloe begins to fall for him.

Every time he does something special for her, Chloe tries to remember the short-term nature of their affair. She tries to keep him in his world, far away from hers.

The more she tries to stop him from entering her normal world, the more determined Nathan becomes. Chloe knows how unrealistic their relationship is and it's time to stop before someone gets hurt.

I loved it! I had expectations from this book just after reading the title and the blurb. The story is exciting and engaging. Both Nathan and Chloe are amazing together.

I like Chloe's character as she's tough and not scared of Nathan just because he's rich. And she negotiates like she'd give classes on how to do it right.

The author has given new life to the same old idea. I wasn't expecting the story to be funny, but some scenes are, at least for a while.

It's one of those times, when I have nothing against believing instant love or quick HEA at the end. That has everything to do with the author's writing and memorable characters with a story that flows effortlessly.

“When someone you love depends on you, you can’t always make the decisions you want to make.” ~~ Nancy Herkness (Book: The CEO Buys In)