Book Review: Pursued by the Rogue by Kelly Hunter 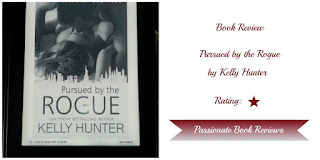 Series: Book 1 in the ‘Fairy Tales of New York’.

“The beauty of old friends is that you don’t have to impress them.” ~~ Kelly Hunter (Book: Pursued by the Rogue)

I thought it’s the same book I had downloaded from Smashwords. But turned out I got confused with the color of the cover.

Then I found that it’s the first in the series ‘Fairy Tales of New York’ so I downloaded it. Why miss the chance to start the series from the start.

So let’s see how “Pursued by the Rogue by Kelly Hunter” is like….

“Pursued By the Rogue by Kelly Hunter” ~~ Synopsis:

At twelve when Dawn’s parents all of a sudden sent her to live with her aunt in the US. Dawn feels hurt, abandoned and unwanted. She grows up feeling unwanted, unaware of the reason behind her parents’ decision and feels like an ugly duckling.

The only good memory she’d from her childhood, was that of meeting one of her friend’s brothers Finn, who made her feel wanted & loved. But that memory too gets tainted by an accident.

Dawn has everything one could ask for in life. She’s a successful businesswoman and now she knows why her parents sent her away. But knowing the reason hasn’t cured her of her hurtful feelings or changed much in her life.

Now that she knows that she has a fifty percent chance of suffering from a genetic condition her father is suffering from, she is even more determined to stay away from people.

So when one of her old friends suggests a reunion, Dawn’s first instinct is to say she’s busy, which is a truth in her life at the moment. Before the symptoms of the disease begin to show, Dawn wants to live her life carefree and tie up some loose ends in her business.

All relationships, as Dawn sees, are nothing but entanglements, she does not want. She also does not want to stay in touch with her old friends. She believes she can handle anything life throws at her.

She meets Finn again at the reunion. Her resolve to stay away from him begins to fade away.

Finn couldn’t forget Dawn and always hoped to meet her again. Turned out Dawn didn’t even stay in touch with his sister, so there’s no chance to meet her again.  But now that she’s reappeared, he’s hoping to find if there’s more to their attraction and if it’s something long-term.

This time he’s ready to pursue Dawn. What he does not know how to handle are her rules? She does not want anything serious and as long as he understands that, they could have a relationship.

Finn wants to know why the weird rules, but it seems Dawn’s still the girl who never shared her sorrows. But this time he’s ready to not let her go without a fight.

First, I want to know who the rogue in this dull story is. The Finn’s behavior doesn’t match the label and if I’m correct, a woman is rarely called a rogue.

Anyway, the story begins on a boring note. The author tries hard to pile up as many tragedies on Dawn as possible in this novella to get sympathy for her I guess.

I just couldn’t feel anything for Dawn and stopped myself from rolling my eyes. I don’t like these kinds of characters in romance novels, who have nothing but suffering in their life.

Only one or two conflicts in a story are enough to grab readers’ attention if done right, no need to turn a character into walking a tragedy. Then the story is so short that there’s barely any romance. One moment Dawn is pushing Finn out of her life and next moment they are celebrating their superficial HEA moment.

The ending is loaded with so much ‘sugar’ that it’s unbelievable.

There’s no spark between Dawn and Finn. They come across as one dimensional too as the author spends most of her time introducing Dawn’s other friends.

As per my research pretty much of them wrote for Harlequin at one time, which I consider a plus point when downloading a book. But they seem to be following the same old formula from their time at that company, but the newer seems less interesting.

The only good thing I found was: ‘Pursued by the Rogue’ is a novella at best. The story is unhinged enough in its short form.

It would have been nice if the author had turned ‘Pursued by the Rogue’ into a novel than a novella, considering all the issues main character has and all the idiotic secondary characters crowding the story need time too.

‘Pursued by the Rogue’ comes across as nothing more than an attempt to sell the next books in the series.

“All theoretical knowledge in the world mattered little when shit got personal.” ~~ Kelly Hunter (Book: Pursued by the Rogue)