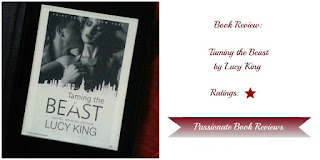 Series: Book 3 in the “Fairy Tales Of New York”

I still remember how much of a horror show ‘Pursued by the Rogue’ was for me, yet I thought, let’s read another book in this boring series.

So here I’m with a review of ‘Taming the Beast’….

While growing up, Mercy had a crush on one of her best friend’s older brother Sebastian. But now that she’s in her twenties, she thinks she’s immune to his presence.

Mercy for the sake of her friend, decides to confront Seb why he’s such a horrible elder brother. Is it really that difficult to see how much his sister and her friend need his presence in her life? Why cannot he be a decent human being for a change?

But her confrontation like the last time doesn’t go as planned. She does confront him and his indifferent attitude bothers her, but it’s so difficult to overlook their ever present attraction.

Even after years of telling herself she doesn’t feel attracted to him, turns out she feels the attraction.

After the death of his parents, Seb cut ties with almost everyone around, especially with his younger sister. It’s difficult for him to comprehend the idea that his sister wants anything to do with him, even after knowing he’s the reason why they became orphan at a young age. But as per his sister’s feisty best friend, he’s wrong and just plain mean to his sister. Seb for a change decides to take Mercy’s suggestion and get in touch with his sister.

When Mercy comes into his life once again to thank him and proposes no strings relationship, Seb wonders if it’s a good idea. He likes having Mercy around, but she also confuses and challenges him to change.

Mercy is determined to play his game and get what she wants if he agrees to her proposal. If he agrees she’d get everything she wants, she’d get him out of her system once and for all and in the meantime complete her MBA too and go back to her family business.

She tells him she’d not fall for him. But could she keep her words?

I hoped “Taming the Beast” would be better than “Pursued by the Rogue.”

Let’s begin with: It’s a same old one; all of them are. Grumpy guilt ridden hero hiding in his home (like a beast from the fairy tale) and heroine comes in to save him from himself.

I know it’s the same old story I have been reading in all the Romance novels, BUT “Taming the Beast” manages to make the idea so boring that the very thought to finishing the book is torturous. I prevailed; sometimes I just cannot stop myself from finishing these horrible stories at all.

The Characters: Mercy and Seb is a boring couple or rather they don’t have much of anything between them to have a story. They are one of the reasons for the failure of this story.

But the most credit for the failure of this story goes to the author’s dull emotionless writing style combined with no character development or world building. This is the first time I’m reading the author’s work so my guess could be wrong.

Just like in ‘Pursued by the Rogue’ a lot of time is spent on detailing chatting of Mercy and her boring friends when all they do is talk about men in their life.

All that talk is useless could have been deleted in favor of developing some chemistry between the main characters and writing good dialogues. Goodness, I could not believe it how boring the dialogues are.

These are previously published Harlequin authors and frankly, these kind of boring stories aren’t what I expect from them.

“Taming the Beast” is one of those books you’d skip reading and not miss anything.