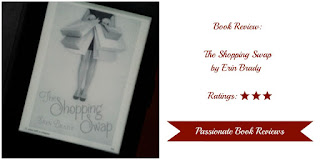 “Imagination is not cheating. If that’s the case, every couple is guilty of being unfaithful.” ~~ Erin Brady (Book: The Shopping Swap)

The title promised a light read and the blurb makes it seem funny.

Maggie almost has everything – almost. She is a teacher and loves her job. She also has a steady boyfriend Richard. The only problem is they haven’t discussed when they would take their relationship to the next level – the marriage.

Maggie desperately wants to get married, but Richard isn’t taking subtle hints. Come to think of it, they have not spent much time together ever since he’s secured his dream job. Isn’t it time to get married now that he’s become an attorney?

Maggie doesn’t want to come across as one of those girlfriends who nag their boyfriends into marriage. But she’s also done waiting. So she decides to organize a special night to entice Richard into discussing what’s most important to her.

She buys expensive lingerie, but when she comes home, she finds a housecoat in her shopping bad. Maggie couldn’t believe her bad luck. The first time she invests her money to buy something expensive and ends up losing it.

Not only that even Richard ends up cancelling their dinner date as he’s some important work to attend to. Maggie spends her time sharing her woes with the housecoat. The next day she decides to exchange the housecoat, but the rude salesgirl refuses to help.

Maggie was about to leave when she collides with a handsome guy Benjamin Sanders. Turns out her shopping bag got exchanged with Benjamin. Maggie gets her bag back and ends up chatting with Benjamin.

It’s obvious as much as Maggie doesn’t want to believe that Benjamin and she have a spark of attraction. But even if he’s interested, she couldn’t and wouldn’t cheat on Richard.

It’s true that they are having troubles in their relationship, but cheating is not a solution. When Benjamin offers to become friends Maggie reluctantly agrees.

Maggie all of a sudden finds herself keeping her blooming attraction to Benjamin in check, trying to set another date with Richard so they could talk and not listen to her elder sister who wants Maggie to leave Richard and have some fun with Benjamin.

Then there’s Benjamin, who sometimes behave as if she should know who he is, till he tells her his identity. Maggie is a bit disappointed he’s not a spy as she’d guessed initially.

Even knowing who he is, doesn’t change Maggie’s opinion of him and they continue their friendship. As they tiptoe around their attraction, Richard continues to dodge her attempts to talk to him and Maggie finds herself with more questions than answers.

OK, ‘The Shopping Swap’ is a simple and straightforward Chicklit. Not much fun after a point. Maggie throughout obsesses either over her neglectful boyfriend or wonders if it’s okay to enjoy Benjamin’s company. It’s not difficult to tell how it would end.

It’s a story kind of like virtual revenge on your ex, where the main lead ends up getting full revenge and everything she wants. Something that rarely if ever happens in real life.

So if you’re (still) harboring bad feelings for your ex, maybe you’d like to read “The Shopping Swap.”

I cannot discuss characters in it as you stay in Maggie’s head and reformed playboy Benjamin plays his role perfectly. Meaning, all’s well that ends well.

The only thing that’s different about Maggie is that she’s not obsessing over her weight or hates her job or is into shopping. But I cannot say that her obsession is unique, but it’s amusing to read about her journey.