Book Review: The VIP Doubles Down by Nancy Herkness 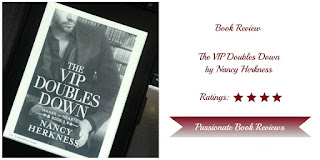 Series: Book 3 in the ‘Wager of Hearts'.

“There’s no sweeter music to an author’s ears than having a reader speak passionately about his book.” ~~ Nancy Herkness (Book: The VIP Doubles Down)

I just couldn’t wait for ‘The VIP Doubles Down’ and kept looking if it’s there in the Kindle Unlimited program. There’s this small voice warning me ‘wait, don’t run towards it too fast, it may not be what you’re expecting’.

I blame it on some of the stories I read recently – stories I was expecting to be good, but they turned out to be anything but.

But these kinds of things happen. I just hoped all would turn out well in the end.

Let’s find out if ‘The VIP Doubles Down by Nancy Herkness’ lives up to the expectations…..

‘The VIP Doubles Down by Nancy Herkness’ ~~ Synopsis:

Gavin always loved reading. So he chases his dream and becomes a writer. In time, he joins the league of some of the world’s renowned and rich authors.

If he wants, he’d stop producing new installments in his highly successful spy series. But money or no money he loves to write and he wants to continue the series.

The only trouble is, he’s not written anything new over a year and everyone wants to know when he’d release the next book. It’s not just his readers & agent.

But the movie producers are waiting for him to come up with a next book too, as soon as possible. Or they want to hire a ghostwriter, something Gavin refuses to give permission to do.

The problem is Gavin wants to write, but can’t. Only the select few know the reason why he’s not written for so long. Gavin’s suffering from writer’s block and he does not know how to cure it.

All the pressure of not being able to write, the call of his messy past along with the thought that he’s the only one who’s yet to find love, is not helping.

Gavin is against the idea and he makes up his mind to dismiss the therapist whenever she’d show up.

Allie gets the assignment to treat Gavin, thanks to the reference of her previous boss. She might not have gone freelance, if she were not fired because of her ex-husband’s antics.

She wants to make freelancing work for her as soon as possible. And treating a famous billionaire author is surely a good start. From her first meeting with the moody author, it’s obvious to Allie that Gavin needs treatment.

Now if only the grumpy handsome author wasn’t bent on firing her even before she’s begun her work.

But Allie somehow manages to administer one treatment, hoping that he’d change his mind about the treatment. Afterwards he still tells her he does not need her around.

Allie leaves, wondering how to best navigate her life after this new road block.

Gavin liked Allie. She’s professional, skillful and fan of his books. But there’s something more about her that he likes. He understands that’s not a good reason to keep her around.

But when he feels a slight improvement in his condition, he calls Allie back.

Also, he wants to discuss his books main character with her. He felt some connection to the character for the first time in a long while, after a brief discussion with Allie.

So he makes a deal with Allie – he’d keep her around if she agrees to share & discuss her vision of his character.

Allie needs the job, if everything works out as she thinks it’d, Gavin might recommend her to some other people, so she agrees.

But she’s no idea how she’d help Gavin write again. He might find the stories she made up with her mother about his books' main lead too silly.

Soon she finds herself getting entangled in Gavin’s world and personal & professional world lines begin to blur. He wants her around him more and more and it feels good to be wanted.

But Allie’s no longer naïve enough to think their brief affair would go anywhere permanent and like the last time she doesn’t want to lose herself while helping someone else.

Gavin loves spending time with Allie. His writing muse is coming back to him slowly and he’s falling for Allie.

But there’s no way he’d allow her to get too close to him. Enough women in his life have betrayed and left him. He no longer trusts that someone could be different.

So the series comes to an end and I’m sad. I read ‘The VIP Doubles Down’ fast and then thought maybe I should have kept it around for a while.

I loved reading Allie and Gavin’s story. Gavin is more complex than Allie. Or we’d say he’s made his life complex by refusing to resolve certain issues in his life and then moving on.

Allie has issues in her life, like everyone around, but she doesn’t stay in the past for long. I like it that she doesn’t make much attempt to explain herself in the end.

When someone jumps to conclusions, they are less likely to listen to any explanations offered, before they calm down.

But ‘The VIP Doubles Down’ almost came close to the number one spot on my list of favorites from Ms. Herkness. I still favor ‘The CEO Buys In’.

It’s not just the main characters that I liked. There’s a guest appearance from Chloe & Nathan and Miranda & Luke. Then there are: Ben and the new character Hugh.

They both have a good presence and Ben should have at least a novella since he’s sort of a regular in the series.

The end felt a bit rushed or maybe I just didn’t want it to end. But good or bad, every story ends.

“When you’ve wronged someone you love, the best way to win forgiveness is to grovel.” ~~ Nancy Herkness (Book: The VIP Doubles Down)