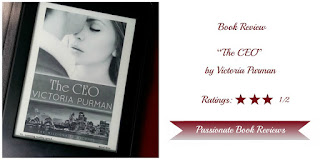 "When you’re not happy, it eats at you and you start searching for happiness somewhere else. Because everyone deserves that, don’t they? To be happy?" ~~ Victoria Purman (Book: The CEO)

I downloaded this book from Smashwords. I spend some free time (a lot actually) there too.

I like the colorful cover it has, especially the lower half of it. It reminds me of a book I had on Australia, filled with beautiful pictures of the places to visit. Maybe my impulse to download the book had something to do with the good memories the image triggered.

“The CEO by Victoria Purman” ~~ Synopsis:

Callum meets Ava, elder sister of his ex-wife, after a while at the funeral of his father. He remembers how Ava went to lengths to show her dislike of him when he's married to her younger sister Lulu.

For some reason she dislikes him and he wants to know the reason. So he decides to throw her off guard, after finding that she's a landscape designer, by offering her a job to design the landscape around his house. The family house he & his brothers intend to sell.

Ava didn't want to attend Callum's father's funeral and meet him again. But Ava agrees when Lulu insists that Ava's presence would help her face Callum along with her new boyfriend.

For a moment, Ava thinks Callum is joking and not offering her such a lucrative job. When he doesn't withdraw his offer to re-design the landscape of the property that's well-known in the country, Ava says yes. The offer is too tempting and once in a lifetime kind of an opportunity.

She’s sure Callum won't be around while she worked on the gardens. The truth is Ava never disliked/hated Callum. She fell in love-at-first sight with Callum the day Lulu bought him home to introduce to the family.

So Ava hid her love behind the mask of cool indifference, making her sister, Callum and others believe she didn’t approve of him. What was she to do? She felt guilty for having feelings for her sister's man.

Now that Callum and Lulu are no longer together, the situation is no better for Ava. She believes Callum cheated on her sister and she can't forgive him for hurting Lulu. But she still loves him and wants him.

While working on the gardens and spending some time talking to Callum, Ava realizes despite what he did to her sister, she just can't seem to hate him. She wonders how someone nice like him could be so cruel to her sister.

On the other hand...

Callum realizes Ava's not the person he thought she's. Callum and Ava can't deny the attraction they share. While Callum doesn't hesitate to share his new found feelings for Ava with her, she seems hesitant.

Ava begins to feel guilty as her feelings continue to grow Callum, but she’s torn between her loyalties. Callum refuses to tell Ava what happened and Ava knows she needs to ask her sister. If she wants to keep her sanity or maybe the man she desired for so long.

"Things happen in marriages that you can’t see from the outside." ~~ Victoria Purman (Book: The CEO)

The story is quite straightforward and runs smoothly without too much conflict. One conflict there is but that's solved easily, so the characters can have their happy ending.

It's also short read; almost like reading a Harlequin romance. A little research and I found that the author writes for the publisher.

I liked both, Ava and Callum's character. Callum is a nice guy...too nice and Ava is nice too.