Book Review: A Gentleman Says 'I Do' By Amelia Grey 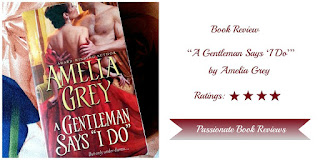 "The act of revenge is never as sweet as the anticipation of it." ~~ Amelia Grey (Book: A Gentleman Says 'I Do')

I got the book because I found the blurb amusing and the line 'A Gentleman Says 'I Do' But Only Under Duress.'

Wanted to read as I anticipated some comedy and the heroine is an author, who's known even if she's not. Mystery!

Let's get on with the review to know more about the story....

'A Gentleman Says 'I Do' By Amelia Grey' Synopsis:

Iverson along with his twin Matson return to London after establishing their business in America as per their father's wishes. But they want to settle in their homeland.

Soon they hear about a parody published in a popular paper that seems to question their parentage. After reading it, the brothers are furious at the author's audacity to insinuate something that scandalous.

Matson's sure that in a few days people will forget and move on to another gossip because it's just a parody, not an irrefutable proof.

It seems people do not just think that the parody is amusing. But they also are eager to share their appreciation of the parody with Iverson. As if someone questioning his late mother’s character would be amusing to him.

It isn’t. So after punching one gentleman for wanting to discuss the parody, Iverson decides it's time to confront the author, Sir Philip Crisps.

Iverson intends to scare Sir Philip, so that neither the author nor anyone else in the future, would dare to write about any member of the Brentwood family.

When he reaches the author's house, he runs quickly into Sir Philip's rude staff and his feisty daughter, Catalina Crisp.

No matter how Iverson tries to intimidate Catalina with his words, she refuses to lose her calm or show fear. After a while, he starts suspecting, she's finding his behavior amusing.

He finds himself getting intrigued by the feisty young lady, who stands firm on her stance that her father’s not home. He leaves with the promise to come back to meet her father.

Iverson's visit shakes Catalina more than she showed on her face while tackling Iverson. When she'd finished her father's unfinished manuscript, like always, all she's thinking about earning some money.

Thanks to her father, who lives a carefree life and never bothers about money, Catalina has to worry about money.

After turning sixteen, Catalina at once understood that someone needed to behave like a responsible adult in her household and that someone's not going to be her father or her aunt. So she appoints herself the caretaker of everyone and everything in the house.

Taking care of their huge house, its maintenance, staff that her father kept adding to and her aunt etc. all required money she learned quickly.

Their only source of income is her father's writings. But he believes in disappearing without a trace and often without finishing his work.

So Catalina started to finish his work to get the money in his absence. Not once she’d thought that someone might read too much into her words and comes to confront the author.

Iverson begins to search Catalina's father too, and goes around meeting Catalina all over the town. Giving gossip-mongers fodder to start a rumor that Baltimore Rake is trying to woo the author's daughter.

"Gossip travel fast and long, especially when it's salacious." ~~~ Amelia Grey (Book: A Gentleman Says 'I Do')

With a spring in his steps and a song on his lips the Baltimore Rake begins to chase & woo Catalina, in the process, both ends up falling for each other.

Catalina can't stop her thoughts from wandering in Iverson's direction. And every time she thinks about him or spends time with him, it reminds her of a secret she's keeping.

Should she confess that she's the co-author of the infamous parody that he doesn’t like? Or should she wait for her father to come back home and then request him to stop the publisher from publishing the last two installments?

Would Iverson ever forgive her for keeping the secret and understand her reasons?

"There are so many more important things to think about than that elusive emotion called love." ~~~ Amelia Grey (Book: A Gentleman Says 'I Do')

What an entertaining book! I found Iverson's character most amusing and it's my favorite too.

Iverson's character is contradictory to what the author wants us to believe. At least, I'd not, for one moment, imagine Iverson as a 'rake or anything similar.'

I found him more sentimental than Catalina, as he loses hold over his emotions faster than her. Second, sometimes he seems as clueless as Catalina. Like that one time when someone suggests to Iverson that maybe the man he's searching was with his mistress.

Considering Iverson's Rake-ish' image, he should have come to that conclusion without any help from anyone. He keeps insisting he's a bad boy, but gives an impression of 'The Gentleman Doth Protest A Lot.'

I liked Catalina too she's feisty, kind, caring, loving and sometimes a bit of a doormat. The only thing about her character I didn't like was: her insistence on taking on duty after duty without asking her father or aunt to behave like adults.

In the end, I was expecting her family to grow up and take responsibility for themselves but some people just never mature and only grow old.  As a secondary characters Catalina's family members are one of the best, when it comes to entertaining you with their weird antics.

at February 08, 2021
Email ThisBlogThis!Share to TwitterShare to FacebookShare to Pinterest
Labels: Historical Romance