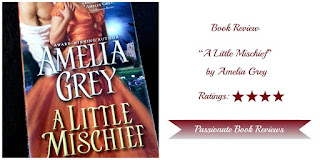 "One can learn all sorts of things from reading whether it be books on poetry, horrid novels or the London Times." ~~ Amelia Grey (Book: A Little Mischief)

I enjoyed reading “Gentleman Says I Do” so getting another Amelia Grey novel made complete sense. Of course, it means my expectations were high.

Let's see how “A Little Mischief” is:

After the sudden death of his father and older brother, Daniel inherits the title: The Earl of Colebrooke. Along with the title comes some responsibilities/obligations....like:

1. Search a suitable wife, who'd produce an heir or two and the sooner the better.

2. Worry about and search a suitable groom for his younger sister.

3. And if possible, stay out of trouble to keep up with his new image & reputation.

Soon after getting to London Daniel's best friend informs him that his sister, Gretchen, attends some Reading group that's getting infamous as the Wallflower Society. The group comprises only of shy girls of marriageable age, but with no prospect of getting an offer of marriage anytime soon.

Daniel in an instant decides he doesn't want his sister getting involved with possible future spinsters. It will ruin any chance of his sister's marriage prospects. He decides to talk to the group leader Isabella. But before that he tries to discourage his sister from attending the group meetings.

Before Daniel could arrange a meeting with Isabella, he meets her when she accompanies Gretchen to his house. Both women to his confusion and distress inform him that Gretchen killed a man in Isabella's garden.

Daniel believes either woman’s claim. He is sure Isabella is playing a game involving him and his sister. He at once decides to go along with Isabella to see the dead body in her garden. After finding no dead body, Daniel is even surer that Isabella is up to some mischief.

But what? He doesn't know yet. But suspects maybe she's setting a marriage trap for him.

Isabella is sure she saw the body of one of the notorious and eligible bachelors in town, lying motionless in her garden. She's shocked at not finding the body where they left it. More than anything Isabella is angry at Daniel's accusation that she's planning some mischief.

Before meeting him, like every other lady, she's curious to meet him. After meeting him, she's sure he's the one man she wants to avoid.

But the world is a small place or rather since they attend the same parties not making his formal acquaintance isn't an option. They meet again and the dead man attends the party as well, confirming some of Daniel's suspicions about Isabella.

Daniel asks Isabella to not say a word of her made-up murder tale to anyone or else. Upon not finding, Gretchen, at the party, Isabella insists on joining him in search of his sister in the gardens.

They find Gretchen standing frightened near a dead body of the same man. The dead body once again disappears. But is soon found and this time the man is dead for real.

To make sure Gretchen is no way implicated in the murder that she claims to have not committed, Isabella & Daniel launch their own investigation. Daniel didn't want to involve Isabella in his investigation but she declares she'd go on her own.

So begins their drama of making people believe that Daniel is courting Isabella. Despite the differences, they're attracted to each other and can't keep their hands off each other. Daniel intends to marry someone, who'd listen to him and wouldn't go around investigating murder.

Isabella isn't anything like what Daniel wants in his wife. She's witty, independent, decisive and a free spirit. He wants her, but he doesn't want her.

Then Isabella puts whatever fears Daniel have about her wanting to trap him into marriage at rest by revealing her grand plan to become a spinster just like her aunt.

Isabella has always liked her aunt's life. Her unmarried aunt is free to live her life as per her wishes unlike married women. She craves to live an independent life too, where she answers to no one.

But the infuriating Earl is ruining her plans. Despite their differences they like each other and search for excuses to spend more time alone with each other.

Both are aware of the fact that if they got caught, they'd have to marry, spoiling their independent plans for their lives.  It's not just Isabella, who can't stay away.

No matter how infuriating Daniel finds Isabella's plan & not wanting to spend time with her anymore than necessary, one thing he knows, no other lady intrigues him the way Isabella do.

But the trouble is she's not the kind of lady he's searching for to get married to. What to do?

I think the best part about Amelia Grey's books is... the women protagonists. I'd, of course, be wrong as it's only my second Amelia Grey novel.

Still so far, I have found the heroines likeable, because of their independent nature. Not that I have anything against the rogues (included the reformed ones like earl in this one) roaming around. They are as interesting and charming as the heroines.

So I wasn't surprised that I liked Isabella and Daniel's characters and didn't want the story to end. I'd not believe the story ended within a couple of days.

Anyway, I can always get another book.

"The only thing I'm looking forward to us being old enough to be off the marriage mart." ~~ Amelia Grey (Book: A Little Mischief)

at February 01, 2021
Email ThisBlogThis!Share to TwitterShare to FacebookShare to Pinterest
Labels: Historical Romance