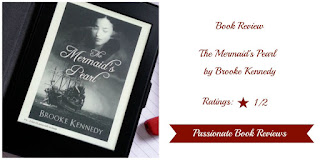 "Things cannot go back to how they used to be. Things happen for a reason. Even the worse of things do. Don't waste all your time wishing for a past that can't return." ~~ Brooke Kennedy (Book: The Mermaid's Pearl)

All it took to make me want to download this book was the word: mermaid!

I quickly downloaded it after reading the blurb, which seems interesting enough. I even left one of the books I was reading to start this one.

The Merfolks are on the verge of extinction. To combat the grim situation, their King decides to introduce arranged marriage system. This would hopefully make sure their species survive.

Raewyn is a princess, expected more than others, to follow the new set of rules. But she’s an adventurous princess and a romantic.

Her mother used to tell her stories of true love and how it changes one's life. She wants to find true love and not marry as per her stepfather's edict.

She does care for her kind’s survival. But she has no interest in marrying anyone, if it's not for love.

She longs to find the one her mother always talked about. But she's ready to settle down with her good friend Tristen, even if she knows that her father wouldn't approve of the match, as he’s a commoner.

One night when another ball's going on, where she's expected to choose the suitable guy to settle down with, Raewyn decides enough is enough. Despite her sister's pleading to not leave, Raewyn leaves on one of her treasure hunts with Tristen.

Her treasure hunt is the only time she feels free and as if her life still belongs to her. Also, Raewyn craves adventure, something no one in her family understands.

But the treasure hunt goes wrong when a giant squid begins to hunt Raewyn & Tristen. To save her friend, Raewyn makes sure the creature chase her.

Before she'd fool the creature and safely return to the safety of her home, she's captured. Lucky her, it's a full moon night and she wishes on the moon to give her legs.

She gets her wish, but she's still in trouble as she's aboard a pirate ship of one of the most notorious pirates roaming in the sea -- Captain Aiden Flynn.

Aiden's reputation is so bad that even sea creatures know about him. Raewyn is sure, she would not survive. Chances are the pirates would guess what she's and then they'd want her to fulfill their wishes.

But when Aiden keeps Raewyn safe on his ship from her own reckless behavior and his crew, she wonders if he's the man everyone believes he's or someone else. Is she really safe on his ship?

Even if she's safe, she needs to leave as soon as possible before either the humans around her finds out her true identity or she falls for the charming pirate.

I found the first few chapters uninteresting and slow. I couldn't get into the story at all. That I'm blaming on the reckless princess in the story. She’s so boring.

The dialogues between Raewyn & Aiden are 'stilted' at best and not witty or flirty. It's as if both have no idea how to flirt.

This one complaint is a bias of mine! The idea is good, but the first person POV created proximity to the princess, who I didn't like at all. This made me wonder if, the story would have sounded better in the third person POV.

You care about the whole story if you care for the characters. I didn't care what happened to either Raewyn or Aiden. Aiden is one of the most uninteresting pirates I have come across in fiction.

The characters are one dimensional. To add to all this chaos, I found the writing style tiresome too.

Now I'm wondering why I left a book in the middle to read this one. There was no need to leave a perfectly good one in the middle for this one. If only you'd tell which one would disappoint you in advance, life would be easy.

The story has potential and is interesting after a few chapters.

I didn't like Raewyn's much. But when I finally paid attention to the little detail that 'she's 18'. That made her childish behavior tolerable a bit and that she's a spoilt princess.

The way it ends, it seems there’s going to be a sequel; after all, it’s in fashion these days, even if the story is anything, but interesting.

"Most of the children don't remember what it was like but I do. If I close my eyes, I can see everything as it used to be." ~~ Brooke Kennedy (Book: The Mermaid's Pearl)

Hit Or Miss: Read it at your own risk.

at December 22, 2020
Email ThisBlogThis!Share to TwitterShare to FacebookShare to Pinterest
Labels: Paranormal Romance