Book Review: Undone by the Duke by Michelle Willingham 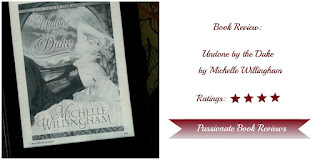 Series: Book 1 in the ‘Secrets in Silk’

“While you cannot stop yourself from being afraid, you can choose the way you want to respond to it.” ~~ Michelle Willingham (Book: Undone by the Duke)

The first time I saw this book in the Kindle Unlimited program, I didn’t pay it any special attention. But after seeing it tossed my way a few times I decided to read the blurb.

‘Undone by the Duke by Michelle Willingham’ ~~ Synopsis:

Victoria’s afraid of getting out of the house ever since she got lost and almost died. Her family tries to help her get over her fear of outdoors, but they couldn’t.

So she stays indoors and fills her free time sewing gowns and lingerie. It keeps her busy as well as gets some money to keep her family from becoming poor in the absence of her father.

Her mother is struggling with the finances and it seems there’s more debt than they could ever pay. But selling naughty lingerie brings money that selling gowns don’t. So reluctantly Victoria begins to concentrate on the lingerie.

Only her sisters know about her passion for sewing and what kind of clothes she designs and makes. Not all of them agree, but they understand the necessity of catering to the demand that makes them money.

This is sisters’ way of helping their mother with the money without making her aware of that fact that they are engaging in a business activity that would result in a scandal, if anyone ever finds out.

Victoria is the only one not even worried about anyone finding out her secret. It’s not as if she has any chance of getting married.

She cannot leave the safety of her house and that means she would never meet a man willing to marry her. She has made peace with her fate.

But she doesn’t want her secret to come out as it would affect her sisters’ chance of marrying suitable men.

When her mother and sisters insist that Victoria accompany them to their aunt’s house for Christmas, she manages to stay behind with just the servants to accompany her.

Her mother’s apprehensive about leaving Victoria in Scotland since crofters and their anger over having their houses burnt by an Earl. But she has three more daughters to marry and staying indoors would not get them noticed. So they leave.

Almost everything was fine in Victoria’s reclusive life until a man shot in the leg lands in her care. She’s too kind to throw away the man, even if it goes against the proprietary. If someone found out, it’d turn into a scandal.

Jonathan, after winning some land in Scotland in betting, leaves England to not just survey the new property, but to get away from the vicious rumors of his haunting past.

He’s not aware of the situation with the crofters and that the previous owner had booted them out and now they are thirsty for the owner’s blood.

A boy thinking him to be the previous owner shoots him and when Jonathan next opens his eyes, he finds himself in someone’s house.

It doesn’t take Jonathan too long to realize that it’s not safe to tell anyone his real identity. There’s a danger of getting killed or worst being married off to the girl who’s taking care of him without a chaperone in the house.

Victoria’s brave act of saving his life and not wanting anything in return begins to make Jonathan fond of her. He tries to help her with her fear of going outside.

When Victoria’s mother finds out about a man living in her house with her daughter, she comes back to see if the situation can be salvaged.

Victoria’s mother didn’t have to persuade Jonathan to marry Victoria as he wants to marry her.

Victoria agrees to marry him, but she’s sure he’d come to hate her and her inability to behave as it’d be expected of his wife in time.

When Jonathan begins to avoid Victoria, she decides that she’d not imprison herself in her new house and would try to get over her fear to for the sake of her marriage.

When I found out that the story’s told from multiple POVs, I almost abandoned reading ‘Undone by the Duke’. The author has turned the old idea into something almost new by adding multiple POVs.

I’m no fan of multiple POV in romance novels (too spoilt), but I continued as I liked Victoria & Jonathan’s story, despite the interruptions by this or that character’s mumbling.

After a couple of chapters, I forgot about my annoyance with POV change as I got invested in the story.

Victoria’s character is different than most heroines I read about. She’s no doormat, just suffers from intense fear of outside after getting lost in the woods.

Jonathan’s character is more or less like any other romance hero, not exactly memorable, but not forgettable either. Together, Victoria & Jonathan make for interesting characters.

I liked the superstitious housekeeper, who keeps trying to give evil spirits a way out of the house.

Another trouble I had was towards the end, when the chapters started moving too fast to get to the HEA land. That’s when I started wondering if some characters POV could have been edited out to have a better ending.

Anyways, one book isn’t enough to make up my mind about multiple POV story. So I would try another one of Ms. Michelle Willingham’s books as her storytelling managed to keep my interest.

“Marriage is not a choice to make lightly. Just because a man may seem suitable does not make him the right husband for you.” ~~ Michelle Willingham (Book: Undone by the Duke)

at January 03, 2021
Email ThisBlogThis!Share to TwitterShare to FacebookShare to Pinterest
Labels: Historical Romance