Book Review: Unraveled by the Rebel by Michelle Willingham 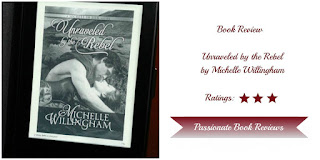 Series: Book 2 in the ‘Secrets in Silk’

“There are some men who cannot accept defeat. They’ll destroy everything in the hopes of acquiring what they desire most.” ~~ Michelle Willingham (Book: Unraveled by the Rebel)

I wanted to move on to ‘Undressed by the Earl’, but thinking I might miss something I downloaded ‘Unraveled by the Rebel’ instead. When you have the chance to read the entire series in order and could easily get your hands on all the books, then you should do it.

Let’s find out what’s the verdict on it….

‘Unraveled by the Rebel by Michelle Willingham’ ~~ Synopsis:

Once upon a time ago, like girls of her age Juliette dreamed about getting married, maybe even to her best friend Paul.

She also knew her parents may not agree to marry her off to a commoner. Then Paul was sent away to London to study and to keep to him away from trouble, unfortunately, the trouble found her.

At present, Juliette harbors no dreams or intention of getting married ever. She cannot tell anyone why she has no interest in seeking a match for herself.

She has confided in only a few people out of necessity, but not her sisters and especially not Paul. She’s ready to spend her time and life keeping track of the earnings from their business.

She knows she must discourage Paul from pursuing her and encourage him to find someone suitable for himself.

It’s been years since Paul last met Juliette, but one thing he has always been sure of was her love for him. But for some reason, Juliette wants him to find someone else.

He’s perplexed by her weird behavior. Should he believe what she’s saying or what she’s not saying?

Paul is determined to find out why Juliette avoids him and Cain Sinclair hints at the events that changed Juliette. Paul’s sure he knows who’s responsible for ruining his and her life and he wants to kill the wicked Earl.

But before that he wants Juliette to trust him enough to tell him what happened. When Juliette moves to London to visit her aunt, Paul decides to follow her.

Trying to win Juliette’s trust and her hand in marriage are not the only reasons to take Paul away from the Scotland. He wants to ruin the earl, who’s responsible for the death of his father. But killing the wicked earl would only get him imprisoned.

While he’s in London, he’s planning to take full advantage of the family title that he may inherit. As a doctor no one will invite him to the balls and parties, but as an heir to a title would remove that small trouble.

Juliette runs away to the safety of London when Paul’s questioning becomes too much to tolerate. There she may not be safe from the matchmaking schemes of her family, but at least she’s safe from Paul’s probing.

But when she meets Paul, she’d not believe that he’s trying to become someone he’s not for her. She’s scared someone would find out his real identity and forbid him from attending any more parties.

As much as she wants to stay away from him, his persistence is making her want a life she’d not have. Telling him about her predicament is probably the only way to keep him from chasing her around.

When the earl threatens to make her secret a common knowledge, Juliette has no other option, but to tell Paul everything. Even after getting the answers to his questions, Paul is determined to marry Juliette on her terms.

Juliette is sure, sooner or later, he’d come to regret his decision and her. Still, she agrees to marry Paul, not just to escape the threat. But hoping maybe Paul’s version of their life could be possible.

If I have to pick which sister I like the best then only Victoria & Amelia would make it to my list. I don’t find Juliette or Margaret interesting at all.

Though, I do sympathize with Juliette’s character and what it went through. I still found my attention drifting in the direction of other books which is always a bad sign for a story.

I don’t have any complaints about Juliette & Paul’s characters or their story.

The one thing that annoyed me too much: too many terrible things happening to Juliette.

Other than that the plot is well crafted. It just couldn’t keep my interest.

The writing alone kept me reading ‘Unraveled by the Rebel’. I chose to read this one as I thought that I might miss something important if I went with the third book.

As it turns out, nothing of importance happened that would have made me wonder what happened in ‘Unraveled by the Rebel’.

Even when the entire story is written so beautifully, I still don’t care about the stories of secondary characters and cannot make out why they are there at all. For example: the story of Andrews’s sisters’ parents. Oh, why the torture!

The only good part is I felt that the other characters’ stories are not that many in this one.

at January 09, 2021
Email ThisBlogThis!Share to TwitterShare to FacebookShare to Pinterest
Labels: Historical Romance