Book Review: The Mistress of Spices by Chitra Banerjee Divakaruni 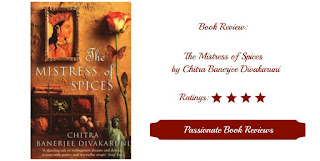 I decided not to read 'The Mistress of Spices by Chitra Banerjee Divakaruni' after watching the lackluster movie adaptation.

The full-fledged novels, in my opinion, are better option for review. ;)

Where were we…yes the movie adaptation of ‘The Mistress of Spices’?

I understand that movie can't have every scene or character from the book.

But, it’s such an emotional read, you can feel what each character is feeling and going through. And the movie is lacking all the necessary ingredients to make it interesting.

Anyways, let's move on with the review as I don't review movies here.

'The Mistress of Spices by Chitra Banerjee Divakaruni' ~~ Synopsis:

Tilo received her training from a mysterious woman known as the Old One. The Old One lived on a mysterious island and taught the art of using spices to suit individual requirements.

If done in a right way spices have the power to solve almost any problem in people's lives.

Before Tilo lands in Oakland, California, the Old One warned all the mistresses to not exploit the power of spices for their own benefit ever.

“Remember,” said the Old One, the First Mother, when she trained us on the island. “You are not important. No Mistress is. What is important is the store. And the spices.” -- Chitra Banerjee Divakaruni (The Mistress Of Spices)

Tilo is unlike other mistresses. She’s driven, willful and sometimes rebellious. Her rigorous training on the island under the watchful eye of the Old One has not cured her of her elemental nature.

No matter how much Tilo tries to tame her curious self, at times she finds it difficult not to break a rule or two. Like when she meets Raven for the first time, she dares to dream, to desire a life away from the spices and the store she runs.

The more she entertains the idea of a personal gain, the more Tilo notices the loss of her powers.

Instead, of healing her customers, the spices begin to play wicked games to punish Tilo for daring to love someone else, other than them.

Tilo begins to fear that the spices will abandon her.

Tilo loves helping people and has no idea how to live without such an incredible gift. Or if the spices will allow her to live her life, in case, she dares to leave them for Raven.

She’s torn between her love towards the spices and the man, who nudges her to take a step towards love. But it’s not easy for Tilo to choose as her decision has the power to affect the lives of individuals she cares about.

She’s aware to teach her a lesson, the spices can wreck havoc in the lives of individuals she holds dear.

Tilo’s life revolves around the magical spices and helping her customers. Betraying her vow to the spices isn’t an option for her.

Yet she wants to take a chance and explore the idea of having more in her life. Is there a way she could have it all?

“The Mistress of Spices” from the beginning to end is about Tilo, her life, her choices that takes her to the Old One’s door and then to a foreign land to help strangers. All the other stories in the novel, instead of distracting, only add more intrigue and suspense.

Tilo’s life, her love story and her desire to have it all and her will to fight for it and the paranormal twist. I loved the vivid description of spices.

It’s difficult to stop reading ‘The Mistress of Spices by Chitra Banerjee Divakaruni’ till it's finished.

at May 13, 2020
Email ThisBlogThis!Share to TwitterShare to FacebookShare to Pinterest
Labels: Fiction
Newer Posts Home
Subscribe to: Posts (Atom)