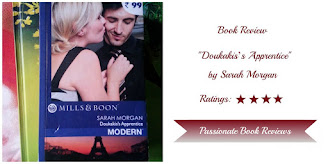 It's one of those times, when I, on purpose, picked a book that’s part of a series. I was aware of the fact that I may or may not get the chance to finish all the books in the series. But I don't like the series that's written by ten different authors.

You can read this book without having to have read the others in the series. I don't know why then it's part of the series. Or maybe I do know because books in the series make more money as per some articles I’ve read.

Let's begin the review and find out how the story goes....

Polly Prince knows how to take care herself, her life and if necessary, people around her too. Her father depends on her and the employees of their failing family business too.

That’s what life or rather her father's constant absence in her life has taught her. She takes care of the problems on her own and doesn't ask for help, especially from her father. That leaves her with little to have personal life, not that she minds anymore.

So when Polly finds out that the ruthless businessman & her best friend's older brother, Damon Doukakis, has taken over her father's small advertising company, she tries to stay cal, for the sake of the employees. And because worrying wouldn't change what's already happened.

Polly, unlike others, knows why Damon bought the company that he probably doesn't want or need.

She suspects he must be angry and buying the company that's not in a good shape as his way of retaliation. If only he knew that her father doesn't care. So Polly's expecting Damon to make most of the staff members redundant or make her life hell due to an incident ten years ago.

Polly is ready to fight for the staff as her father is not around. The board of directors is the reason for the lousy condition of the company.

Among all the chaos and confusion, ‘Demon’ (not my words) Damon enters the office of Prince Advertising and the first thing Damon does is begin to fire the some staff members and as a result get into a verbal duel with Polly.

Mostly because, Damon doesn’t have a good opinion of her and seeing her dressed up unprofessionally in the office, adds more fuel to his anger.

He's mostly angry with Polly’s father. As his younger sister, Arianna is having an affair with Sr. Prince. To Damon’s surprise, Polly is smart, knows how to play the word game and is not scared of him. She can stand up for herself and if the need arises for others too.

She also has a different world view than Damon and doesn’t believe in delving in the past for too long or to the point that it'd drive one to take revenge.

Damon on the other hand is busy chasing his 24-year old sister, who in his opinion, always makes the wrong choices. And as an elder brother it’s his responsibility to keep her safe. If only life worked like that…

No matter how much Damon tries to ignore Polly & how his view of her is changing, he can’t. And the sizzling attraction between them won’t allow them to ignore each other either.

Half of the time, Damon behaved like a bull in the china town. I had no idea how to react, whether to be amused with Damon’s haughty attitude or to hate him.

Anger toward Damon subsides a bit when you find out the reason behind his actions.

Polly’s character is what kept me reading the book. I just loved her character. Sometimes I wondered what’s stopping someone like her from starting her own business.

Only time I felt distress reading the book was when Polly’s father and Damon’s sister shows up. The duo is a perfect example of selfish, thoughtless and irresponsible people.