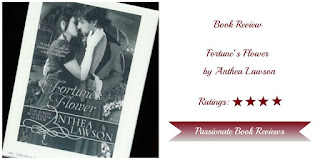 Series: Book 1 in the ‘Passport to Love’.

“Being pursued is not so enviable when it is your mother selecting the pursuers.” ~~ Anthea Lawson (Book: Fortune’s Flower)

‘Fortune’s Flower’ is the second book in the box-set ‘Wicked Temptations.'

I didn’t like the first book in the box-set ‘Viscount's Christmas Temptation by Erica Ridley’. It’s passionless story and I was skeptical of reading any other story.

As I don’t have a good experience reading books from box-sets.

Lily loves to paint, especially botanical illustrations. If it were possible she’d have devoted her life to painting the specimens. But that’s not possible.

She’s already late in securing a good match and on the verge of becoming a spinster. It’s something that worries her mother a great deal, but not Lily.

But Lily knows that sooner or later she’d have to face her mother and her matching-making schemes. Lily has yet to meet any of the matches that haven’t bored her. The guys her mother chooses only seem to have status and money.

She wouldn’t mind becoming spinsters if her mother continued to find the most boring matches for her. But her aunt paints a grim reality of becoming a spinster and staying with her parents for the rest of her life.

The thought of spending her life with her unbearable mother is even more dreadful than spending it with some snotty bore.

So Lily decides to bargain with her parents: they would allow her to go on her last adventure trip with her Uncle’s family and she’d marry whoever they want her to when she returns without complaints.

That makes her parents happy and Lily begins to prepare for the journey ahead. Until…

James shows up at her Uncle’s home and changes everything.

James and his sister became orphan at a young age and went to live with their Uncle. Their Uncle welcomed them in his family, but not his son, Reggie, who didn’t like their presence.

James does not have the wealth of his own and his uncle is sure that once Reggie inherit the title, their life would become miserable.

So James uncle sends James on a quest to find the lost journals of his grandfather. His grandfather was a botanist and had discovered a new specimen of flower, but could not have bought it back with him.

James agrees as he’s also eager to leave London for a while after a duel gone wrong.

James visit one of the friends of his grandfather, Lily’s Uncle and is surprised to find that the elderly man is ready to help him.

There’s only one trouble: James would have to travel with the man’s entire family that also includes someone he would rather stay away from.

The moment James met Lily, he felt attracted to her. But he knows it would lead nowhere as her family would never allow her to marry someone who has nothing to offer.

He’s also no longer a naïve young man, who once thought love was enough. He’s sure Lily would never choose him over status in the society. But he can’t stop thinking about having a future with her.

So when he finds out that Lily would not be traveling with them. He’s relieved.

James arrival almost changed Lily’s plan. She does not want to be near him and feel tempted as she once did before & make a fool of herself.

But staying behind with her mother and preparing for a wedding she does not want, is not something Lily can endure for long.

Soon it becomes evident Lily is not the only one, who will test James patience. As it turns out his envious cousin decides to follow him on his expedition as well. And the adventure begins.

“Life without a husband is better, in my estimation than life with the wrong husband.” ~~ Anthea Lawson (Book: Fortune’s Flower)

‘Fortune’s Flower’ is an amazing story! I loved reading it.

Lily & James characters are interesting along with them the secondary characters. At one time I was wondering if Lily’s cousin would have a story too. She’s quite like Lily.

I’m still quite confused about its title.