Book Review: A Dog and A Diamond by Rachael Johns 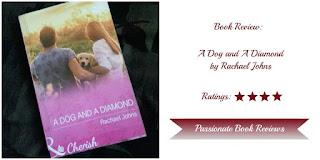 When you want to read what some call sweet or clean romance, where to look. No further than Harlequin’s pastel pink line of books, that’s how I recognize them in the stack of books.

Lately I have come across some books in this line that gave me the impression that they are becoming slightly bit steamy. Nothing against such romances, but it’d be nice if the publishers kept this line as is.

Anyways, let’s find out a bit about ‘A Dog and A Diamond’….

‘A Dog and A Diamond by Rachael Johns’ ~~ Synopsis:

Chelsea is the Breakup Girl. For the uninitiated, she breaks up on the behalf of people who are too scared to do it themselves. The idea came to her when she did it for one of her friends.

Since she’s stayed on amicable terms with her exes, she turned her ability to break up without fuss into a successful business.

That’s how she meets Callum and for the first time fumbles doing her job. Then she runs away from his office after breaking the news of his breakup.

Callum has been engaged to marry Bailey for a long time. He doesn’t even remember what his reasons were. They certainly had nothing to do with love. Other than that Bailey is a good friend and is his mother’s best friend’s daughter. Now that he thinks of it, he probably wanted to prove to his late father that he’s old and wise enough to run the distillery.

He feels shocked and a strange sense of relief when the woman calling herself The Breakup Girl, announced his breakup.

Who breaks up with other people’s girlfriend or boyfriend for a living?

What kind of a job it is?

Is it even a job or is he being fooled?

To get some answers, he follows Chelsea and ends up getting entangled in her search for her missing dog.

When Chelsea gets home and finds the door open, she doesn’t make much of it. Not until she finds her dog missing. She cannot afford to lose her dog too. There’s no one else in her life to come back home too.

She’s most touched by Callum actions. He stays around, helps her with her search and getting her home secured. He even reunites her with her dog. So when he asks her to be his plus one, to keep his mother from asking him to find someone else, Chelsea reluctantly agrees.

She doesn’t want to get involved with a client’s boyfriend, not even casually. But there’s nothing casual about their attraction. She could also not forget that he’s in the business of making a substance that’s responsible for the destruction of her entire family.

But it’s also difficult to say no to Callum’s proposition when she knows that she’d not be having a long term relationship and he’s not looking for one either.

Since I had not paid attention to the title, I tensed when I looked at it and wondered – wasn’t there a better title than this? Hopefully, they would not be spending time running after a dog. Now that would not be a romance.

Thankfully, the story isn’t about the dog, but I’m still not happy with the title. And what’s with the Chicklit brand of blurb?

But I’m happy with the plot, the setting and the characters and everything along with Chelsea & Callum’s sweet love story. What’s there not to love about it?

I liked Chelsea’s unusual job. In the age of the Internet you’d make money off almost any weird idea. It could have some strange consequences as well, something someone like Chelsea may not have thought about.

The author has nicely introduced what I’m guessing are the characters next in line to get their own stories in the next installments. I like it when the authors don’t try to oversell the next stories in the series.

If you get the one right then chances are the readers would try out the next book.

You’d read 'A Dog and A Diamond by Rachael Johns’ for the love of Romance or even a cute fictional dog.