Book Review: A Proposal Worth Millions by Sophie Pembroke 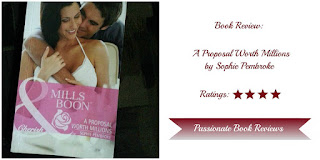 “Attraction…. It’s just that. We all feel it from time to time, with all sorts of people; it’s what we do with it count. Sometimes we ignore it, and sometimes we act on it and see what happens next.” ~~ Sophie Pembroke (Book: A Proposal worth Millions)

After reading ‘From Good Guy to Groom’ I wanted to skip this line. That story just destroyed my good impression of Harlequin’s this line of books.

Anyways, ‘A Proposal worth Millions’ is a different story by an author I have not read.

So I took a chance. Let’s see how this one fared….

‘A Proposal Worth Millions by Sophie Pembroke’ ~~ Synopsis:

After the death of her husband Sadie is struggling to keep his dream alive as a legacy for their son. Sadie is running into financial troubles, trying to maintain the hotel.

Her husband’s dream hotel project isn’t the only one dragging her down, but also the fact that they are so far away from her home country in Turkey. She misses her family. Thankfully, she has a friend working for her and he finds a possible investor.

Sadie is determined to wow the investor with her presentation and get the money that’s needed to make the hotel a success.

But she’s not expecting to meet Dylan as a prospective investor. They used to be friends and he’s her husband’s closest friend. Maybe in other circumstances she would have been happy to have him around.

Sadie prefers to avoid Dylan since the night when he made a move on her and she wondered what if she’s met him before her husband.

But she knows she cannot afford to think like that, as Dylan never hid the fact that he’s not the commitment type. And Sadie has always craved the safety of a stable relationship.

Now that he’s here, she cannot avoid him, nor could she afford to stay aloof.

Dylan may not be into getting into committed relationships in his personal life, but he’s good with business. Dylan could help Sadie save the hotel for her son as a legacy.

Dylan thought Sadie’s aware of his arrival. But it doesn’t take him too long to realize she’s shocked to see him there. For Dylan, Sadie is the one who got away. He always wondered what if he’d met Sadie before his best friend.

But he knew when they had met and he knows it even today that he is not the kind of man Sadie wants in her life.

So he stayed away from her. There’s only one time when in a drunken state his true feelings got out and created awkwardness between them.

Soon Dylan finds out that though Sadie is committed to making the hotel a success, it’s not something where her heart and mind is. He wants to help her, but he also wants her to understand what she’s committing to.

He also begins to wonder for how long their meetings would stay professional, considering their sizzling attraction and now that they could act on it. So he takes a chance and offers Sadie a tempting business and personal offer.

Sadie knew from the start that working with Dylan would be tough, considering their attraction is as strong as it was years ago. But is she someone who could have a good time and not care afterwards?

It feels good to read a feel good story and that Yay once again, I found a good story in this line.

I just wasn’t sure about Sadie & Dylan as Sadie comes across as too reluctant. But they have the chemistry that’s difficult to ignore from the start.

The author builds up Sadie & Dylan’s relationship slowly and steady until everything comes across nicely in the end.

The biggest attraction of stories in this line, for me, is the chemistry between the characters that the authors bring out without getting explicit. Not that I have anything against explicit story-lines, but it’s sometimes good to just read a good story.

‘A Proposal Worth Millions’ is a smooth and a nice love story for a nice weekend. You’d try this one if you’re looking for a sweet romantic read.

“Sometimes you have to stick with a plan for a while to see its full potential. You have to give it time to work.” ~~ Sophie Pembroke (Book: A Proposal Worth Millions)