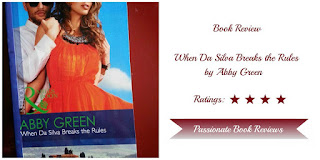 Series: Book 3 in the ‘Blood Brothers’.

One of those books that’s part of a series and I bought it without checking it online first.

It’s also the last one, so I’m wondering about information that I might be missing as I haven’t read the previous two books.

It’s not even given if I would want to read those books, in case this one’s not to my liking.

That’s one reason I kept delaying the reading of “When Da Silva Breaks the Rules.” But now since I had it…

‘When Da Silva Breaks the Rules by Abby Green’ ~~ Synopsis:

Cesar guards his personal life like a hawk, not giving media anything to write about him. There are secrets in his family that he does not want splashed all over the tabloids for everyone’s entertainment.

But sooner than later, some of his family’s secrets might tumble into the tabloid territory, now that he’s attended his half-brother’s wedding, against his better judgment.

So he’s thinking about creating some diversion for the media’s benefit. For now, the presence of a film crew, on his property, is bothering him. But for a few weeks he cannot do much about it.

After all, as a favor to a friend, Cesar approved the shooting of a film at his place, thinking it’d not bother him as he’s not going to be around.

But he returns early from his trip and the shooting is still going on, interrupting whatever little peace he’s got in the place filled with bad memories.

His carefully planned life begins to unravel, after a passionate encounter with film’s leading actress Lexie.

Lexie went to the stables to catch her breath and not get caught up in the web of instant lust for a handsome stranger -- a stranger who turns out to be the owner of the place.

To add to her woes and worries, someone caught them kissing. Soon she knows, the speculations over her affair with the billionaire would begin to circulate.

After making some bad decisions & gathering bad publicity over the years, Lexie is in damage control mode. She doesn’t want publicity that would negatively affect her efforts to recreate her image.

Maybe they could have sorted out their attraction away from the prying eyes of the media. But that’s no longer an option. Both are aware that the news would soon spill into the tabloids and then they would twist it into something it isn’t, denying their involvement isn’t an option either.

So why not play the media to meet their end goals. It would not reflect badly on Lexie to be seen around with Cesar.

Cesar has his doubts about getting involved with Lexie after checking her background. Also, she’s not his type, yet he cannot deny their unmistakable attraction.

The best or the worst thing is the news of the affair with Lexie would probably take media’s interest away from his family. So he decides to play along and want Lexie to agree, mostly his way of handling the news of their supposed affair in the tabloids.

Lexie doesn’t want Cesar to control how the news of their affair would be presented to the tabloids. She’d had enough of someone else pulling the strings and destroying her image.

No more she would allow someone that kind of control. This time she too would decide how things come out in public. She may not know what he gets out of it, but is sure there’s something he’d gain from manipulating the news of their affair.

Cesar agrees to her terms, because either way he’s getting what he wants and there seems to be no reason for complaint. So they embark on their supposed love affair, with the sure knowledge where they are headed.

I read the final installment first; the story leaves me a bit curious about Cesar’s brothers and their mother because I liked reading this story. Maybe their past is revealed a little in at least one of the previous books.

I would like to know a bit more about their mother’s motivation to leave Cesar with his grandparents. Anyways, let’s move on to the characters of “When Da Silva Breaks the Rules” characters: Lexie & Cesar.

I liked the brooding hero Cesar and courageous heroine Lexie. They seem quite developed and their HEA doesn’t seem superficial. They get hitched pretty soon, but it seems like another day in the HEA land of Romance.

I can say that as I have read the story twice now and the verdict is the same as when I read it the first time. In my experience, a very few Mills and Boon novels till date, have survived my scrutiny twice over.