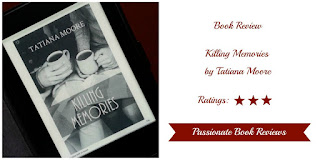 Series: Book 1 in the ‘Killing Memories’

"Why bother if you weren't interested in talking to someone?" ~~ Tatiana Moore (Book: Killing Memories)

The cover looked funny (the previous one) and I needed to read some mindless comedy. It’s also free. But it took me quite some time to read it or get to it amid so many other books I have stuffed my Kindle with.

Estela refuses to date, refuses to even look in the direction of a man, who shows even a slightest interest in her. She believes it's no big deal and certainly not something worth worrying over.

But how to make people in her life understand her viewpoint, especially her domineering mother, loving aunt and her best friend Moo, who are hell-bent on finding her a nice guy.

On a regular basis, Estela has to meet someone, who one of the three women believes, could be a good match for her. So far Estela hasn't found anyone, either with the help of her well-wishers or on her own.

As per Estela, there's a flaw in the three women’s plan:

Moo's plan to set her up with someone is flawed because she'd find someone from her modeling world, who would not like or want Estela.

And her mother and aunt's plan to find Estela a date is flawed because they rarely find anyone she’d like. While attending a party thrown by Moo, Estela chats with a stranger she likes, but didn't get the chance to ask Moo about him.

As it seems Moo's dealing with something that's eating her up. Or maybe she started taking drugs again, Estella wonders.

For a while Estela forgets about the mysterious stranger as she's urgent matters at hand like meeting her family in their home, where to her shock a new date is waiting for her.

Estela meets a new guy, Dr. Martinez, her mother has chosen for her and dislikes him instantly. The moment Dr Martinez enters her life; all of a sudden, things begin to change in her life.

If before she worried only about her strained relationship with her mother and her work life, now she has to worry about a psycho stalker, who insists he loves her very much and she loves him too.

Add a gorgeous photographer, Caleb, who shows up pretty much everywhere and keeps flirting with her and hinting they have met before. Nope, he's not telling, he wants her to remember.

Estela cannot remember when and where she'd met such a handsome guy and how come she forgot about it while he remembers meeting her. Estela doesn't get much time to solve the mystery of their first meeting.

Before she'd process all that is happening in her life, she finds all of a sudden she's a boyfriend, who seems to like her too much and the feeling is mutual.

Along with a stalker, who refuses to take no for an answer. What should she do?

“Killing Memories” it's hilarious. I might have ended up having some issues (mentioned below) with Estela's character yet I enjoyed reading her story a lot.

The story slows down a bit in the middle, but it picks up pace when Caleb's twin Adam shows up on the scene. It's one of those stories that you read when you want good laughter. But:

Good to know Estela has a friend like Moo, who understands her more than her mother.

Estela's self-esteem is too low. So low that sometimes I just didn't want to finish reading the book. She can stand up to Moo's parents or rather Moo's domineering mother as per Estela. There's no scene to confirm her version in this book at least.

She can't stand up to her own mother, who's truly horrible. It's like all Estela's mother wants her to do is marry some psycho and lead an abusive life.

According to her 'it's not the first time her mother along with her aunt had tried to set her up with some weirdo!' Still she keeps tolerating their nonsensical interruption in her private affairs.

That's why I didn't like her sometimes because she's way too doormat-ish. All in all it’s a good comedy and it’s a cozy mystery something I miss categorized. In my defense I haven’t got much experience reading anything other than Romance and Chick-lit. Anything with funny female protagonist seems Chicklit to me.

"Sometimes you don't have to say anything to get your true feeling across." ~~ Tatiana Moore (Book: Killing Memories)