Book Review: The Girl He Left Behind by Patricia Kay 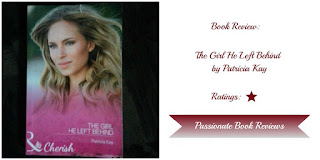 I recognized the name of the author, despite the fact that I haven’t read any of her books till date. But I have some of her titles in the Kindle.

I thought maybe I should test run the writing style, so I grabbed the book and ran out of the library at a full speed (not really).

“The Girl He Left Behind by Patricia Kay” ~~ Synopsis:

Once upon a time ago, Eve and Adam dated and almost eloped. But Eve couldn’t gather the courage to go with Adam. Adam wanted to try his luck in the music industry and wanted Eve to accompany him.

In the end he left alone.

Eve is a single mother to twins and a divorcee. She’s living a quiet life in a small town with not many prospects of getting married again. Not that she feels she’s missing out on something. But she sometimes wonders about what could have been if she’d left with Adam.

When all of a sudden the news spreads that now famous country music star Adam would soon visit the town with his band.

Eve has yet to get over that news when she finds that Adam has landed in the town to attend to his ailing mother. The whole town is buzzing with the news and all Eve wants to do is avoid running into Adam.

Adam’s dream to make it in the music business becomes a reality by chance and for years he didn’t visit his hometown. He likes to believe he’s moved on in life, but he’s not sure.

When he finds out about his mother’s heart-attack, he leaves everything and reaches home. Once in his hometown, it’s inevitable that he’d sooner or later meet Eve.

As it turns out his feelings for Eve hasn’t changed and hers might not have either. But it seems a lot has changed in her life. She also seems to want to stay away from him, it’s obvious.

Adam wants Eve to consider giving their relationship one more chance when it’s apparent that they still feel the same. He’s not sure why she’s bent on avoiding him.

Despite doing all she’d to not run into Adam, Eve manages to meet him. She wants to spend time with him, now that she’s not married. But the more time she spends with, the more she realizes how much she still wants him and what a huge secret she’s keeping from him.

How would he react when he found out about the secret she’s keeping? She’s not even sure if she should tell him or just let everything be.

I didn’t get why Adam wasn’t angry with Eve for keeping such a huge secret from him for some flimsy reason. Since the big reveal comes near the end, Adam doesn’t get enough words and space to vent his anger.

Why he’s so agreeable to all Bill’s stupid demands when that guy has no right over the kids? I wonder whose side the court would have taken if Adam’s character had dragged it all in the court.

This Bill character seems to have mental issues to demand, not request, but demand rights to continue seeing someone else’s children as if they are his.

OK fine, I get where he’s coming from, but he or anyone in his place doesn’t really have what it take to make such demands. This character is practically bullying Eve and later Adam.

It’s not as if he doesn’t have his own child. He’s apparently happily remarried and has a child.

It seems this character wants to punish Eve for not falling in love with him. He was in love with her that’s why he offered to marry her. Also, this Bill character goes around blackmailing Eve and continues telling her “not to meet or tell Adam about his children.”

Let’s move on to the doormat – Eve.

Why Eve is almost always at the verge of a nervous breakdown? From the beginning she comes across as someone just a few steps short of going insane at most mundane things.

Why all big reveal about the kids is done just around the end? I would have liked to read about the kids’ input after finding out about their real father. They seemed unnaturally okay and happy about the deception.

I have downloaded quite a few Patricia Kay books on Kindle and after reading “The Girl He Left Behind” I’m wondering if I should mass delete them.

I cannot tolerate utopia (stupidity) like stories in Contemporary Romance.  ‘The Girl He Left Behind’ is the book I should have left behind.