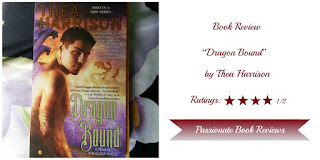 Series: Book One in “The Elder Races”

“Books were an invention he (only sometimes) thought was more precious than any other treasure.” ~~ Thea Harrison (Book: Dragon Bound)

Some days it’s difficult to track the back story of books I buy. For example: why I bought them? But I'm sure I didn't buy 'Dragon Bound' after looking at the cover. That I can write with certainty for two reasons:

1. The cover seems hazy. I thought it only appeared like that online.

2. It also looks scary, especially the way the model's eyes are glowing. Anyone would be running away from him.

I hope I wouldn't be running away from the book after a couple of chapters.

Let's see how the story goes...

Pia Giovanni, half-human and half-Wyr, is on the run for her life as she's done the unthinkable. That is, stealing from the one and the only oldest living dragon in the world: Dragos Cuelebre.

Pia’s mother raised her to run at the moment’s notice and hide her real identity. Of course, her mother taught her the importance of not doing anything foolish like revealing her real identity to anyone.

“Live very quietly. Leave everything behind moment’s notice. Don’t get to attached to people and don’t tell anyone anything about your real self.” ~~ Thea Harrison (Book: Dragon Bound)

She didn't want to pick a fight with a possessive, angry and ancient Dragon, who has no other work to do, but spend his time chasing a thief, who stole a penny from him. (Yes, all the madness for just a penny…it’s quite a funny setting!)

Pia agreed to steal from Dragos because she made the mistake of sharing her real identity with her ex and he blackmailed her into stealing. All Pia wants is to belong in the world and feel loved. But after she finds out the seriousness of her actions, running away from the angry dragon is all she can think of.

When Dragos finds out about the stolen penny, he loses his mind and sends his people to capture the thief.  Pia runs from place to place, knowing well enough, there’s no place on earth to run away from Dragos.

Dragos has nothing better do (I’m not being sarcastic here at all). He’s super-rich, super-possessive of all his things (some of which he'd stolen too) even a penny and one of the most powerful creatures in his and in the human world.

No one steals from him and live to brag about it. Just imagine if someone found out that someone stole a penny from the only living Dragon and got away with? He has to think about maintaining his ruthless (human eating) reputation.

Also, whatever he wants, he gets and then there’s a small problem that he’s been living for years (or eons), so rarely anything surprises or excites him. He’s super-bored with living for so long.

When everything goes your way all the time or you can roar and scare everyone into catering to your wants, maybe it all gets boring after a while.

When he finds out that someone broke into his ‘treasure chest’ despite the tight magical security, all of a sudden there’s something exciting to do. Someone to chase is more like it.

The theft infuriates and intrigues him at the same time; the thief even more so. Dragos wants to find Pia to know ‘who’s actually behind the robbery’ and ‘how the thief opened all the locks and got away.’

Dragos leaves everything and joins the search party. Even better, he uses a tracking spell to lure Pia straight to him in dreams. (Why bother with traditional means of searching people when you have magic to do the work?! This is one reason I like reading paranormal. One always has some cool tools at their disposal, technology can go to hell.)

By using the spell Dragos wanted to know more about Pia’s weakness so he’d manipulate her into telling him the name of the person behind the crime. But the reverse happens and hunter got trapped in his own trap.

He gets her to his place. She’s intriguing, makes him laugh and he feels happy around her, so Dragos decides to keep Pia around, while Pia keeps wondering if he’s going to kill (eat) her.

So after finishing the book, I'm glad I bought it and it's not one of those books I'd have to give back to the library. I'm not even sure if they have it.

I just loved reading about Pia and Dragos and got lost in the amazing world of shifters the author has come up with.

I wasn’t expecting the story to be funny, but it is, at least some scenes are especially Pia and Dragos some interactions are. Overall, I just loved the story!