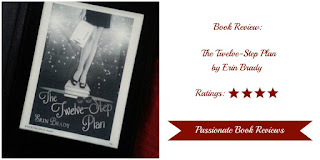 Since my first experience was good, if not better, I didn’t bother to read the blurb. It’s not as if I wouldn’t have found out soon enough what’s going to happen.

Let’s get to the synopsis and the review of ‘The Twelve-Step Plan’….

At the young age of twenty-nine Sadie has made giant strides in her professional life as a professor. But she has a boring personal life. The only highlight in her personal life is watching pop star X and drooling over his good looks.

Sadie is obsessed with the pop star and isn’t sure if she should have a crush on him at her age. Isn’t having a crush on pop stars a teenager thing?

But she cannot help it. There’s nothing she doesn’t like about X. Sometimes she feels the unexplainable urge to meet X.

One day Sadie decides to turn her life around. If she could achieve so much at a young-age in her professional life, then why should her personal life stay behind?

Sadie gets on with the research and finds out all that’s available on her favorite subject over the Internet. Not only is that Sadie ready to use some of her connections to get to X, she even manages to find out his address.

Sadie couldn’t get in, but she isn’t the one to give up easily. So she takes the help of her friend to find a way to meet X in some concert. But her bad luck strikes again and she misses the opportunity as she gets into a fight with another fan.

Before that Sadie’s plan was almost invisible and known only to her best friend, who doesn’t understand Sadie’s obsession. After the brawl, everyone at her college finds out that she’s present at the concert venue as she lands in the newspaper.

Her students think she’s cool. Her colleagues’ think she’s lost her mind and the college Dean wants to fire her. She begins to wonder if she should abandon the crazy plan. When another opportunity falls in her lap and Sadie is determined to not miss it, no matter the cost.

Her efforts pay off and she gets the opportunity to meet X. Her quiet and boring life begins to turn around and become most interesting it’d ever been. She’s living a life that seems like a dream. Sometimes it seems out of control and she wonders if that’s what she signed up for.

Does she really want all the madness she’s witnessing around her?

I don’t get the madness some people have for the celebrities. But the idea of the plot is interesting and something that I have not read about in any Chicklit novels till date.

Instead of worrying about getting married Sadie is busy behaving like a teenager. It’s unrealistic (or is it?) which makes the story so interesting.

The lesson from the story is the simple one: ‘Careful what you wish for, you might get it.’ I think I have finally understood that it’s a grim warning just like don’t touch the fire.