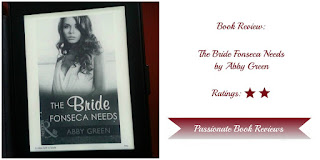 Series: Book 2 in the ‘Billionaire Brothers’.

I recognized the name and picked the book. I enjoyed reading “When Da Silva Breaks the Rules” & “Married to the Tycoon’s Empire.” So why not try another one.

Let’s find out a bit about “The Bride Fonseca Needs”….

Darcy would not have thought that one day she’d work as a secretary to Max. But the time has changed, for her and him and she needs the job. If she knew Max was going to be her boss, she’d have skipped the interview.

But it’s too late and she got the job.

Max recognized Darcy from his boarding school days when his life took a turn for the worse. He doesn’t like to remember that time in his life, but it’s not as if he can forget the trauma.

Since then he has turned his life around. He hires Darcy, not only because she has the necessary qualifications, but because he also believes she would not hit on him.

All was going well up until Max realizes that he cannot secure a deal he wants because he’s single and his playboy image doesn’t sit well with his conservative client. The client wants to give the deal to someone who is married and understands the value of family.

The client’s words infuriate Max so much that he ends up declaring that he and Darcy are engaged. Max’s declaration shocks Darcy, but she doesn’t create a scene during the dinner-cum-meeting much to his relief.

The more Max considers the idea of having Darcy as his fake fiancée, the more he likes the idea. Now if only Darcy would understand and cooperate.

Soon Max finds out that Darcy has no intention of faking a relationship with him so he could win a contract. But now that he has lied, he needs to prove himself right in the eyes of his client.

So he begins his pursuit to get Darcy to see reason. Everyone wants something, she must too. As much as Darcy doesn’t like Max’s idea of faking a relationship, she knows beggars are not choosers.

There’s something she wants -- a house of her own. It’s something she has wanted ever since her parents separated. And if agreeing to play along with Max’s lie would fulfill her long standing wish then what’s wrong with that.

Darcy agrees to play along and lays down her own terms to which Max instantly agrees. Before she’d tell what’s happening, she finds herself falling deeper into Max’s web of lies, deceit and lust.

Max lies again and this time they end up getting married. Darcy wants to keep their arrangement professional after all, that’s what it is. But now that they have come this far, then why not mix professional with personal.

Let’s start with what I liked – both Darcy and Max. Even if reading Darcy’s name kept reminding me to re-read “Pride & Prejudice.” I liked that Max couldn’t easily twist Darcy’s arm into doing his bidding.

So I liked Darcy’s character.

But I just randomly thought that when their circumstances were almost identical and she seems as ambitious and driven to succeed as him than why he’s the only one who succeeded.

She could have succeeded too. No? Then I recognized another trope – a bit subtle, but present nonetheless – a damsel in distress. ;)

Anyways, tropes, subtle or not, are not my problem in this story. If the story’s interesting, I would not have cared about the trope.

But this one is missing an important ingredient of a romance novel – i.e. the development of romance. That one is difficult to overlook.

So the trope is old – let’s get married to serve our agendas and I was having no issue with it. The author handles it well enough and makes the old new in her own way.

But the building up of romance part keeps missing something until the very end. There’s enough angst, lust and misunderstandings around. Now if only there’s a bit of romance, before the story ended in HEA.

The end just didn’t click with me. I’d say that “The Bride Fonseca Needs’ needed some space to develop some kind of romance between the characters.