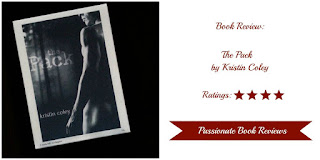 This one if I remember correctly showed up on my Kindle app in the recommendation section as I downloaded some shifter romance books.

So I checked it out and liked the blurb and the reviews were promising as well. But I didn’t want to read YA and the cover doesn’t even suggest it is. Possibly, New-Adult?

Anyways, let’s find out a bit more about ‘The Pack’….

“The Pack by Kristin Coley’ ~~ Synopsis:

Jess moves to a small town, where her father is living after the divorce, after having a nasty clash with her mother. She has no plans to ever go back to live with her mother.

She’s sure living with her father is also temporary as she’d leave for the college next year after graduating high school. She loves her father, but she’s not planning to live in a small town that’s not even looking promising enough to stay for a year.

But there are no other options. She finds her father in a motel and less than pleased with their new living situation. She’s also not looking forward to joining the local high school, but it would do for now.

Right from the moment Jess steps into her new school, it’s like she’s been singled out somehow. Some of the kids and one handsome giant are keeping an eye on her.

She doesn’t know what their problem is, but she also doesn’t care as long as they would leave her alone. It seems they don’t want to as one of them, Caleb, approaches her and invites her to join their group.

Jess doesn’t and soon finds out from one of the girl’s she befriends that Caleb belongs to the group of students who stays together, invites no one to join their group and are called The Pack in the school due to their weird ways.

Jess thinks, but doesn’t bother thinking too much about Caleb’s invitation to join The Pack. She just wants to finish high school and if possible stop herself from getting into trouble and her father as well.

She most certainly doesn’t want to get involved with a teacher, even if the thought for some reason is too tempting. Despite her best efforts to stay away, soon Jess begins to get entangled in the web of The Pack.

But Jess isn’t sure she wants to know their why or those nasty people’s reasons to chase her around the town. She believes if she found out their secret her life would change and she’s not sure if she wants that outcome.

But for how long could she avoid knowing what’s staring right into her eyes?

Wow! What a surprise hit. I loved reading ‘The Pack’ and it’s good to know there’s a second one coming soon, but clearly not soon enough. Also, the end is open ended, and not HEA at all, considering Jess & Dom seems not be marrying anytime soon.

I’ve strong suspicion that ‘The Pack’ falls in the New Adult category, though it stopped mattering the moment I realized I couldn’t put down the book without finishing it. I found the first few chapters slow, but they quickly pick pace once the author builds up the story.

I would have liked to read Dominic’s POV as well. But I’m guessing when the author wrote this down, maybe not much was planned other than this story.

I liked all the characters, which is rare in my case to like even the secondary characters. But this story is interesting and I cannot say it enough times. I’m also biased towards Paranormal Romance Novels.

I’m still wondering if I have issues with the teacher student romance that ‘The Pack’ is or if it’s enough to, bad mouth the story as a whole.

So make up your mind if you have issues with this theme, though it runs out of its course before the story ends and certainly wouldn’t be much of an issue in the next one.