Book Review: Married to the Tycoon’s Empire by Abby Green 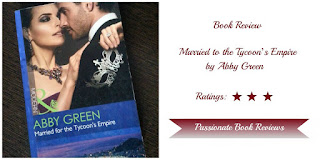 Series: Book in the ‘Brides for the Billionaires’.

I have good memories of reading “When Da Silva Breaks the Rules”, so I thought let’s read another one of Ms. Green’s stories.

Let’s find out a bit about “Married to the Tycoon’s Empire ~~Abby Green”….

‘Married to the Tycoon’s Empire by Abby Green’ ~~ Synopsis:

Ben likes to keep his past as hidden as possible. But when it comes to hiding his present from the tabloids, he’s having no success.

Whether he does something or not, the tabloids find something to write about. Their favorite subject is his commitment free love life and his rivalry with some of the best in the business.

All of it never bothered him enough to take action, until the media created Casanova image of his, started getting in the way of his business.

So he invites three of his so-called rivals to discuss their bad press situation. Turns out, the tabloids are having a field day speculating about them as well.

After a long discussion, they come to a conclusion that they need to clean their allegedly playboy image. To do that successfully, it’s high time they get married to women who would fit into their world.

One of them suggests the name of a reputed matchmaker who helps people like them find long-term partners.

Ben meets with the matchmaker and his eyes stops on someone who looks familiar. It doesn’t take him long to remember why the picture of the woman looks familiar.

It’s the picture of Julianna Ford, the daughter of one of the businessmen, whose business Ben intends to buy. So far his efforts are not successful. But if he manages to woo Lia, he may be able kill two birds with one shot.

After the disastrous end to her engagement, Lia decides not to date to please her father again. So when she finds out that her father has created her profile on a matchmaking site, she’s angry.

She tells the matchmaker to take her profile down. But in the end Lia agrees to go on a one date with the man who has shown interest in her.

Ben’s not even the last person Lia expected to find on the matchmaking site. Why he’s there is not her concern. She’s sure that there’s only one reason he chose her to date: to get to her father through her.

She’s determined to show him that he miscalculated his move. After meeting Ben, Lia makes it clear, she’s not interested in listening to him and he wouldn’t get easy access to her father.

Ben could not believe how fast their meeting ends up in a clash. But Lia intrigues him enough to want to woo her one more time.

So he attends a charity function Lia is attending. The tide of events turns his way when Lia agrees to play along and auction one kiss to the highest bidder.

This much is clear in Ben’s head that there’s no way anyone else is getting to kiss Lia, not even for charity.

Lia agreed to play along for the sake of the charity. And kiss a stranger not Ben, who makes her angry and at the same time stirs something else in her heart. It’s too dangerous a game to play when he’s being so nice to her and she’s running out of reasons to be angry with him.

The prologue reminded me of another series that started in the similar fashion: The Wager series ~~ Nancy Herkness.

I liked Lia and Ben’s character. They have their insecurities and fears, especially Lia. I wondered if all this would interrupt with the ending as insecurities don’t go away overnight.

But I liked the end and this time I didn’t feel as if it’s rushed. The credit for keeping my interest in the story goes to the author of course.

I was also planning to get the next books in the series. But after doing some research it’s clear that they are not written by Abby Green and on that front I’m risk averse. If I found them in the library, then good, if not, then it’s not worth the risk.

I hate this trend of stories written by different authors in the same series. What’s wrong with one author writing all the stories in the series?