Book Review: Undressed by the Earl by Michelle Willingham 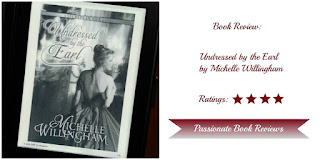 Series: Book 3 in the ‘Secrets in Silk’

“Every woman wants to believe that a man loves her, even if it isn’t true.” ~~ Michelle Willingham (Book: Undressed by the Earl)

I have been looking forward to reading Amelia’s story. I just hope it doesn’t disappoint me.

Let’s find out more about ‘Undressed by the Earl’…

‘Undressed by the Earl by Michelle Willingham’ ~~ Synopsis:

Amelia is the youngest and she’s more romantic than all her sisters combined.

For years, even before her debut in the society, she’s a crush on Viscount Lisford. He’s the rake of her dreams and despite knowing his flaws Amelia wants to marry him one day.

She’s not sure how she’d get her family to agree to their match as Viscount Lisford is also her sister Margaret’s ex-fiancé.

But Amelia the ever hopeful romantic remains sure that there’s a good person beneath the mask of a rake. She wants to be the one who reformed him and made him fall in love for good.

For the time being she has other concerns like helping David, the Earl of Castledom, find a suitable bride.

There was a time when Amelia considered him a bore and would not have talked to him ever. But after talking to him, she finds out that he’s an interesting man, who is still mourning the loss of his wife.

They end up forming an unlikely friendship and Amelia agrees to help him. In turn, she asks David to help her convince her family that Viscount Lisford isn’t a bad guy.

For six years, David mourned the sudden death of his wife. He’s still mourning and might not have attended another party in his life if not for his daughter.

Still, he understand the need to marry a suitable woman, who would agree to become mother to his daughter, produce an heir and wouldn’t ask for much of anything from him.

Once in a while he catches his mind drift in the direction of one of the most unsuitable candidates – Amelia -- before the logic intervenes.

Amelia is too young for him, charming, attractive and thoroughly unsuitable to become his wife. She also doesn’t match any of the requirements on his list.

He knows she would not be satisfied with what he’s offering and would demand more.

That doesn’t mean he like the idea of Amelia wanting to marry a rake. It seems she has got some wrong ideas about reforming one of the most notorious rakes in the society.

David also has no idea how he could save someone who doesn’t want to be saved. Instead, he agrees to talk to women, Amelia has listed; the list also includes her elder sister’s name. Margaret does seem like a suitable wife material.

But when Amelia finds herself on the verge of ruin, David couldn’t stand aside and not save her. In a weird twist of fate, David finds himself married to Amelia, who challenges his decision to continue living in the past.

Amelia never imagined in her wildest dreams that she would end up marrying David, but there’s no other option. Now that they are married, it doesn’t take her long to realize that David wants to stubbornly stay in the past.

She doesn’t want a marriage in the name or on his terms and she’s ready to do what it would take to make her place in his heart. But first she needs to win over his daughter.

Another good story! Amelia and David’s characters are so unlike each other and the author brings out all the drama and tension that could build between such personalities amazingly.

Sometimes I find the drama that happens in the last couple of chapters too melodramatic. It certainly doesn’t keep me from reading or enjoying the books.

So that drama continues, but the drama of secondary characters’ lives has slowed down a bit with every book in the series ‘Secrets in Silk’.

Anyways, it’s an entertaining series and you should read it if you like historical novels.

“A man could make a fortune if he could write a pamphlet of instructions about how to interpret a woman’s feelings.” ~~ Michelle Willingham (Book: Undressed by the Earl)