Book Review: Unlaced by the Outlaw by Michelle Willingham 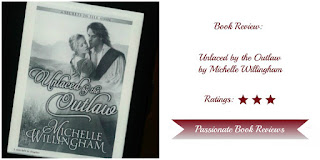 Series: Book 4 in the ‘Secrets in Silk’

“There’s something quite satisfying about facing one’s nemesis and bringing him down.” ~~ Michelle Willingham (Book: Unlaced by the Outlaw)

‘Unlaced by the Outlaw’ marks the end of the series ‘Secrets in Silk’. Let’s see how it all ends…

‘Unlaced by the Outlaw by Michelle Willingham’ ~~ Synopsis:

No one who knows Margaret would ever describe her as someone who’s impulsive. Margaret is the sensible one and knows all the rules.

But when the man who destroyed her chances of getting married, elopes with her younger sister Amelia, Margaret decides to take Cain Sinclair’s help to trace her sister.

She should have stayed behind. All the good manners she has been taught said so, but she believes she’s somehow responsible for not warning Amelia enough against that man.

So on an impulse first she alone goes in search of Cain and after convincing him to search for Amelia, she decides to go along with him.

In all the commotion it made complete sense to her. But Margaret is ill prepared for the journey that was ahead of them.

Ever since the first time Cain met Margaret he dreamed about marrying her some day, even when it becomes clear that his dream is just a dream.

They are from different backgrounds. While he struggles to provide a good life for himself and his young brother, Margaret is expected to marry someone rich. She’s trained to become a lady and he’s no one of importance, but a Highlander who loves her.

Also, she’s made it clear on numerous occasions that she’d not consider him for marriage. But Cain refuses to give up hope. When Margaret approaches him, he’s reluctant to go on a wild goose chase.

They don’t know which road the viscount took and it could take days to trace Amelia. By then it would not be worth it and he wants to return back to Scotland to his younger brother.

But he cannot leave Margaret to her devises either, so he agrees, even when he knows it’s a terrible idea to allow her to tag along with him.

As they begin their journey, it becomes clear that Margaret is not suitable for the tough journey, nor it seems the viscount took that road. Soon their journey becomes more about their survival than search for Amelia.

Margaret begins to wonder if it was worth it to live her life as a good girl when it has bought her nothing but heartache in the end. Could she break free from the chains she tied to her ankles and dare to choose the life she desires?

I wanted to skip reading ‘Unlaced by the Outlaw’ as Margaret didn’t come close to getting my interest.

I have issues, leaving a story unfinished when it’s downright boring and this series is anything, but boring so far. So I decided to read a couple of chapters before deciding to abandon the book. I couldn’t leave the series unfinished.

The credit, I probably, have mentioned before too, goes to the author’s interesting writing and storytelling style.

Once again, I got invested in the story and the characters I didn’t have much interest in. I liked Cain’s character from the first book. It’s Margaret’s prim and proper character that made me think I may not like this story.

By the time I was done with the story, I liked Margaret’s character as well and could understand her character better. The plot as usual is interesting and multiple POV didn’t distract from the main story.

I not sure if my impression of multiple POV in a romance novel has improved.

If you don’t mind hearing from secondary characters’’ POV too in your romance novel, you might enjoy reading the ‘Secrets in Silk’ series as well.

Sometimes two people might seem very different….but they are a great deal alike.” ~~ Michelle Willingham (Book: Unlaced by the Outlaw)