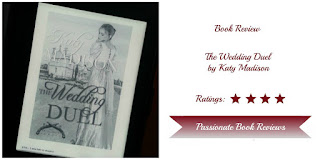 Series: Book 1 in the ‘The Dueling Pistols’.

I probably would not have read this book, if it were not part of a box-set and just because of the cover. Why change such a nice cover and exchange it with something so weird?

The one I saw on Goodreads is far better than this one. I was thinking I might be able to shoot that one.

The blurb is misleading too. Why, why?

Keene may not want to shoot one of his best friends. But he does not have a choice. Keen’s other friend is bent on ruining his life and marriage in grief over an incident.

But something goes wrong and he only ends up injuring his friend. On some level, Keene’s relieved. But he still has no idea how he’s going to clean the mess that his friends have created.

Maybe he shouldn’t have jumped into their predicament. It’s not as if there is lack of problems in his life.

Keene is not his father’s son and the man who had raised him doesn’t want him to inherit the title or the property. But neither is ready to make the family secret public.

So his father comes up with a solution: either Keene marries his cousin, who his father is determined to declare the next heir or Keene goes to prison for shooting a man.

Keene has many ambitions in life and not one of them involves going to prison. He wants to enter politics and for that he would need a wife anyway.

But he would have never chosen Sophie as the possible candidate for marriage. Sophie never knew anything about control or manners while she’s a kid and he’s sure she hasn’t changed much.

But Sophie he must marry or else. So he begins his journey to meet her parents, hoping they’d decline his offer because of his reputation.

All Sophie wants is to have some fun, ride a horse and if possible dance a little.

But all her parents want her to do is behave like a lady and do nothing until they have married her off to some respectable man. And there are few who her parents have brainwashed into wanting to marry her.

But none of them Sophie wants to marry. So in hopes to escape yet another suitor, Sophie jumps out of the window. But the plan goes wrong and Keene saves her.

Sophie remembers Keene, another person who doesn’t approve of her behavior. Turns out he wants to marry her. Sophie doesn’t know why, but she’s beyond caring.

She likes him and after marriage he’d take her away from her boring country life and stern parents. He surely would take her to attend a ball or two, thinking that Sophie accepts his offer.

Keene is as surprised as her parent with Sophie’s acceptance of his offer of marriage. She’s grown up, but she still seems to behave recklessly.

Then there’s a small issue of mutual attraction between them and the idea of marriage doesn’t seem all that unpleasant. At least, not until his father-in-law implies something that makes Keene wonder for how long he’d avoid his wife.

All the happy dreams of marriage and living in London with Keene, comes crashing down, when Keene leaves Sophie at his father’s house.

Sophie decides that she’d become the kind of woman Keene probably likes, so she’d win his heart. If only she knew the real problem’s something else.

Even if the cover is such a flop, the plot isn’t. I’m glad I didn’t get too much time to judge “The Wedding Duel” by its cover as I would have left reading it for some other time.

I found the duel funny. Maybe I shouldn’t have, it’s nothing to laugh about after all. But I still found it funny. Actually, quite a few situations made me laugh.

Then there’s so much misunderstanding going around that at one point I was sure it’s all going to get confusing. It does not. All the background drama only adds more to the drama, intensity and laughter to the story.

I felt bad for Sophie. After all, she’s the most confused character around and suffers quite a lot because of that. But it’s not like Keene is a bad guy. It’s just a complicated story set in an era with a different set of rules.

Then there’s a sub-plot. When I realized that it’s not going to fade away in the background anytime soon, I suspected I would leave the story in-between. After all, I didn’t sign up for that.

But the story in the background only adds to the confusion, chaos, drama and tension and I quite enjoyed it.

It wouldn’t be wrong to say, “The Wedding Duel” is a comedy of errors..

“A sinner in one regard apparently made one suspect in all other matters.” ~~ Katy Madison (Book: The Wedding Duel)