Book Review: The Haunting of a Duke by Chasity Bowlin 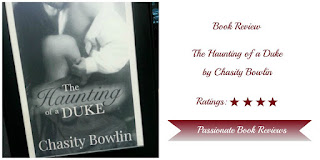 Series: Book 1 in the ‘Dark Regency’.

"I have learned we are all capable of horrible things with proper motivation." ~~ Chasity Bowlin (Book: The Haunting of a Duke)

“The Haunting of a Duke” was hiding somewhere in my Kindle for a while. One day, while riffling through titles I saw this. I can’t say that loved the cover as all covers appear gray & dull in Kindle.

But something about it nagged me to start reading it.

Now let's find out how ‘The Haunting Of A Duke By Chasity Bowlin’ turned out….

'The Haunting Of A Duke Chasity Bowlin' ~~ Synopsis:

Emme has the gift of seeing and talking to spirits. Sometimes the spirits help her uncover truths people want to hide. She refrains from flaunting her ability. But after helping a few people in need, she becomes known as a medium/physic.

That’s the reason why Lady Phyllis invites Emme. Lady Phyllis wants the confirmation that her son, as rumored, didn’t kill his wife.

Emme doesn't mind her gifts much; not until she wakes up in strange places at night. Something if anyone finds out could ruin her reputation.

So getting lost in the tunnels in Lord Brammel's home at night isn't a pleasant surprise to wake up to. But Emme has no control over the spirits and how they want to direct her.

Rhys is surprised to find Emme roaming around in the tunnels at night and wondered what the alleged medium is up to.

He doesn't believe in charlatans, his mother likes to invite into their home. But he doesn't object either as that seems to keep his mother happy.

His mother's not the same since the murder of his younger sister and later the untimely death of his elder brother.

As if this many tragedies were no enough, when his crazy wife, Elise killed herself and everyone, including his mother, started suspecting Rhys.

Rhys never wanted to marry Elise after the death of his brother. He'd even warned his brother against marrying her. But no one listened to him and unfortunately he too fell into Elise’s trap.

Now his mother, yet again has invited another unknown person in their home, who claims to talk to the spirits.

Just because his mother doesn't see the danger in inviting such people in their home that doesn't mean he should not keep an eye on Emme.

Rhys suspects Emme is up to something, maybe she wants to steal something or dupe his mother somehow or is a social climber. So he asks his childhood friend Michael to keep an eye on Emme in his absence.

Emme has enough troubles without adding a suspicious and handsome duke to the equation. He doesn't believe her that's not her only problem....

Emme is beginning to like Rhys. She knows that he distrusts her and does not believe in her abilities.

The other trouble is the nature of her gift seems to be changing as now she can see the spirits just like alive people. So she tells Michael about her conversation with Rhys’s late sister.

Emme's disclosure unravels Michael and he begins to believe her. Michael shares his opinion with Rhys but Rhys isn't ready to believe in Emme's abilities.

But the killer isn't taking any chances dismissing Emme's claim to have talked to Rhys dead sister. If Emme can talk to the spirits, then he doesn't want to take the risk of Emme finding out.

Soon the killer begins his attempts to kill Emme. Rhys gets busy making sure Emme is safe. In his quest to keep Emme safe, Rhys once again finds himself getting married.

The hunt for the killer begins, who seems bent on killing Emme. Also the crazy spirit of Rhys ex wife comes back to haunt him too, threatening to take away one person he's starting to care about more than anyone.

I enjoyed reading 'The Haunting of a Duke' so much so I ended up thinking that it's a novella that ended too soon. Emme and Rhys characters are interesting and the story is engaging till the end. The best part was when I guessed who the killer is.

The only thing that did bother me is how people came to know about Emme's abilities, considering she's not into flaunting or even acknowledging them. A bit of back story would have been nice.

Anyway, the story is interesting. If you too like your historical romance novels with ghosts roaming around then you might enjoy 'The Haunting of a Duke' too.

"When you save someone's hide, it is an act of friendship and generosity and should not be invoked later as a form of currency." ~~ Chasity Bowlin (Book: The Haunting Of A Duke)