Book Review: The Redemption of a Rogue by Chasity Bowlin 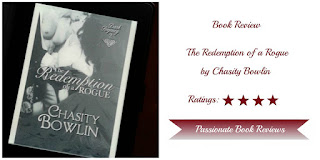 Series: Book 2 in the ‘Dark Regency’.

“There is no man more dangerous than one staring death in the face.” ~~ Chasity Bowlin (Book: The Redemption of a Rogue)

What luck! I found the series box-set enrolled in the Kindle Unlimited. So I downloaded it, after all I did enjoy reading ‘The Haunting of a Duke’.

And Michael’s seemed like an interesting character in ‘The Haunting of a Duke’. I hope his story turns out as I’m expecting it to.

Let’s see how ‘The Redemption of a Rogue’ is….

'The Haunting of a Duke by Chasity Bowlin' ~~ Synopsis:

Michael flees to the country when his recent lover refuses to understand that they have no future together. Not the permanent kind as he does not wish to get married ever.

His new plan also gives him the opportunity to inspect the new property he won in the card game.

When Michael reaches the castle, tired from the journey, he wonders if the old castle is inhabitable. The castle seems to be falling apart and is in desperate need of repair and maintenance.

But that he’d think about after resting.

Soon Michael finds that the castle not just needs repair. It also needs new servants, who are not past their retiring age and do like him a bit.

Another discovery, he makes is that of Abigail, a young unmarried relative of his card companion. His card companion conveniently forgot to warn Michael of her presence in the castle.

As much as Michael does not want to throw Abigail out of the only home she seems to have, but he has no other choice. He cannot allow Abigail to stay. It’d destroy her reputation.

Abigail did all she could do to keep herself from landing at the doorstep of her depraved step-sister Lavinia and her husband.

The arrival of Michael without any warning leaves Abigail with no option, but to move in with her step-sister.

She can tell Michael didn’t know about her and feels guilty about sending her away from her home. But they both know that’s the right thing to do.

Accepting whatever fate throws her way, is not new to Abigail and she’s not the kind to fall apart and tries her best to adjust to her new situations.

Michael came to the country to forget about his worries for a short while and not get entangled in the newer ones. Ever since evicting Abigail, he can’t stop thinking about how she’s doing in her sister’s house.

He’s well aware of Abigail’s step-sister and her husband depraved indulgences. They’re not the kind of people Michael in general likes to mingle with.

But when the couple invites him to join a party in their home, Michael accepts the invitation.

Everything was going fine in the party and he had made up his mind to leave after seeing Abigail was safe, but soon something about the whole set-up in his neighbor’s house begins to make him uncomfortable.

His troubles increase, when a dead body is found and everyone seems more than happy to lay the blame at Michael’s feet.

Michael begins to suspect that the party was thrown with the sole purpose of trapping him. Even when he can easily provide the proof of his innocence, he does not want to put Abigail on the spot.

When Abigail sees her step-sister and her minions trying their best to implicate Michael for a murder he didn’t commit, she comes out as his alibi. Her move seals their fate.

Michael declares to marry Abigail and takes her back to the castle after her step-sister attacks her. Soon Abigail & Michael are married to keep the appearances.

The more Michael thinks about the entire episode at Lavinia’s house, the more he suspects that they want something from him. His life may even be in danger.

And it’s not just him. It seems Abigail is in danger as well. Abigail’s brother-in-law and his friend have their eyes set on her for a long time. But what do they want from Michael, he’s yet to figure.

Not only Michael is bent on solving the new mystery, he is also determined to find a way to seduce his new wife, who seems immune to his charm.

Then there’s also a matter of people practicing depraved rituals taking place in the nearby woods and the resident ghost.

As much as I enjoyed reading Michael & Abigail’s story, I still kept thinking it’d have been better.

First, there’s not much paranormal element in ‘The Redemption of a Rogue’. It’s actually probably less than ‘The Haunting of a Duke’. Same goes for the mystery part in this story.

In the ‘The Haunting of a Duke’ it’s not that easy to find the villain. I’d have loved some more paranormal element. The ghost this time is too tame and the other paranormal element vanishes into the thin air.

Despite all this I still could not stop reading ‘The Redemption of a Rogue’ as soon as possible.

I liked Abigail a lot and her pragmatism. She does not waste her time dwelling over negative side; instead try to find a solution to her problems.

“Be kept ignorant of pertinent facts was never in anyone’s best interest.” ~~ Chasity Bowlin (Book: The Redemption of a Rogue)